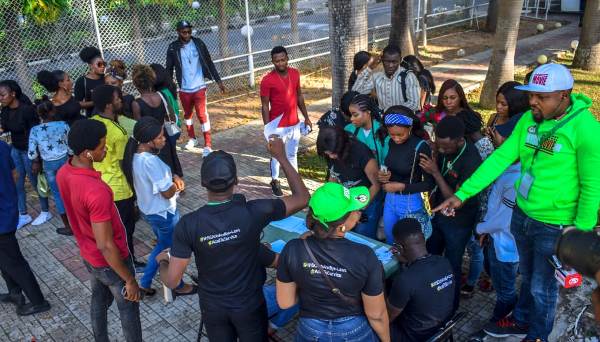 A cross section of participants at the audition for new movie “A Call to Service” in Abuja.

Audition for ‘ A call to Service’, an advocacy movie geared towards promoting core values, Acts and Bye-Laws of the National Youth Service Corps(NYSC), on Saturday, holds in the Federal Capital Territory(FCT).

The youths, including and corps members, seeking acting opportunities, in large number, took part in the audition for the new movie, which held at the Bolingo Hotels.

Mr Jairuspaul Osazuwa, the scriptwriter and producer of the film, said that “A Call to Service” is conceived to promote, tribal tolerance, national peace and unity, which the NYSC scheme champions, NAN reports.

He explained that the audition was to discover corps members that had potential and passion for acting in line with the Skill Acquisition and Entrepreneurship Development ( SAED ) initiative of the scheme.

He noted that Nigeria as a nation has faced a lot of challenges in recent times, and it was imperative to promote things and initiatives that bind citizens inrespective of tribal and religious divides.

“This is the first time a project of this nature and magnitude will be carried out in the history of the NYSC scheme.

“We are glad is it happening now under the Leadership of Brig-Gen. Shuaibu Ibrahim, who is the executive producer of the Film “A Call To Service”.

“The initiative is birthed by the Director-General of the NYSC and it is aimed at projecting the scheme and spread the message of peaceful co-existence and selfless service to fatherland.

“The film will also promote the Acts and Bye-Laws of the scheme by putting the book on screen for effective communication to all stakeholders,” he said.

He disclosed further that Jairuspaul Osazuwa and the D-G of the NYSC will also feature among the cast of ‘A Call to Service.”

According to him, the film will be shot in locations in FCT, Kano and Delta , among others.

NAN reports that NYSC was created on 22 May 1973 , based on decree No. 24 as an avenue for the reconciliation, reconstruction, and rebuilding of the nation after the civil war.

It was created “with a view to encourage and develop common ties among the youth of Nigeria as well as promote national unity.

Under the scheme, young university graduates under the age of 30 are expected to serve their fatherland for one year, known as national service year.

They are posted to states other than their state of origin where they are expected to mix with people from different ethnic groups and learn the culture of the indigenes in the location they are posted to.

This action is aimed at bringing about unity in the country and help the youth appreciate other ethnic groups.