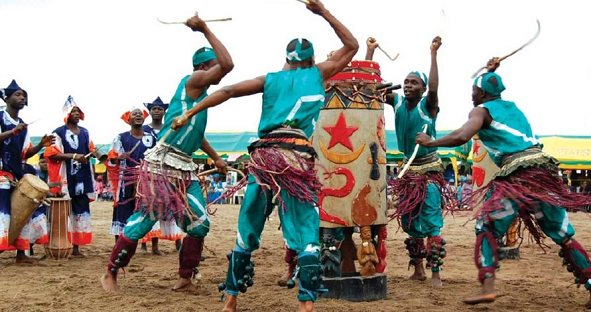 Badagry town was agog at the weekend as all gathered for the celebration of the annual Black Heritage festival.

Addressing participants at the event at the weekend, the Special Adviser to the State Governor on Arts and Culture, Mr. Solomon Saanu Bonu, said the celebration was in fulfillment of the mandate embedded in the Lagos State T.H.E.M.E.S agenda towards the development of Tourism and Economic Empowerment for the great people of Lagos State especially the Badagry Division and to encourage the preservation and promotion of cultural heritage within the area.

“One unique thing about the Badagry Heritage Festival is that, this will be the first time Badagry division will be coming out in this form to project the peculiarities of communities of each of the Local Government and Local Council Development Areas as one. This connotes the unity of purpose we have so clamored for as a division. It is also unique as we hope it will draw more international tourism investors to the area,” Bonu said

He added that the colourful celebration of the Black Heritage Festival in that manner sends a signal to all the residents of Badagry division about the disposition of Governor Babajide Olusola Sanwo-Olu and his passion for the area aimed at promoting unity and progress.

While saying that the celebration shows how focused Sanwo-Olu is to the vision of the State for continuity and a greater Lagos, the Special Adviser enjoined participants at the event to continue to support the Lagos State Government in its quest to give the numerous tourism potentials in the Badagry Division the needed impetus and attention.

He appreciated the State Governor for granting approval for the hosting of Badagry Heritage Festival 2019 which is already in the State’s Tourism Calendar, just as he thanked all the Council Chairmen in the Badagry Division for their cooperation, responsiveness and support with the present administration in the State.

He said the event could be described as a reunion for all the Local Government Areas, LGAs and Local Council Development Areas, LCDAs within the Badagry Division of Lagos State as all the ten councils in the division came together to celebrate the annual Black Heritage Festival in the ancient town of Badagry

.Earlier, the Chairman of Badagry Local Government, Mr. Segun Onilude whose council played host to other LGAs and LCDAs for the event, said that the 2019 edition of the yearly Black Heritage Festival was “a celebration of our unity and what makes the division unique. It is a unity in diversity.”

He recalled the days of District Councils which brought the entire stretch of Seme Boarder now under Badagry West up to Ajegunle under a single umbrella before the unprecedented growth of the region that resulted in the creation of different council areas, stressing that the idea to bring all the councils together was noble and very commendable initiative.

He said that the Governor did a reminiscence of the good old days and thus directed that the chairmen to come together and celebrate the richness and oneness of the division.

He expressed the belief that the celebration would herald good tidings that would make the division a cynosure of eye to other councils in the State.

“The annual festival is a feast of culture and history aimed to showcase the richness and diversity of the African heritage, celebrate African creativity with diverse performances such as traditional and contemporary dance, drama, music, expositions among others. The tradition and modern styles of performance are meant to provide visitors with a unique cultural experience in Lagos,” he said