Meet 6 Nigerian ex-governors who have been to prison 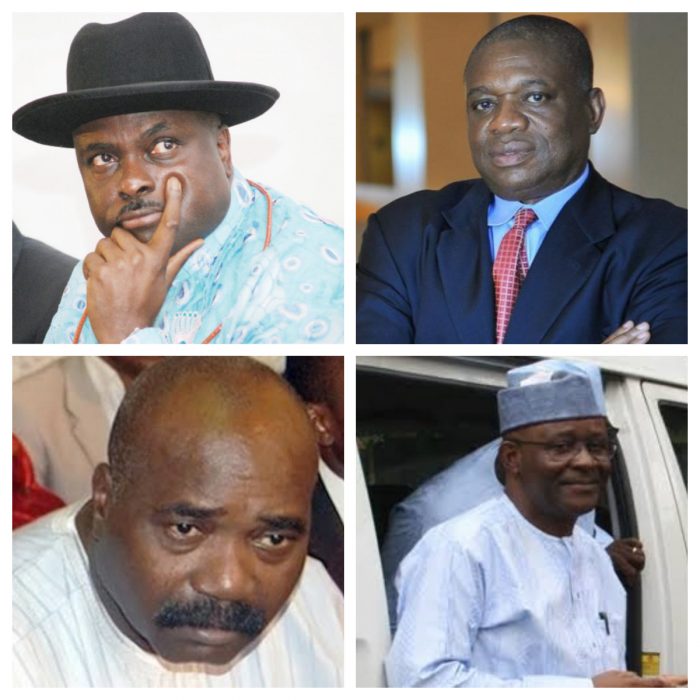 Ex-governors who have been to prison

Political corruption is, unfortunately, a persistent phenomenon in Nigeria. In 2012, Nigeria was estimated to have lost over $400 billion to corruption since independence.

In 2019 the country ranked 144th in the 180 countries listed in Transparency International’s Corruption Index (with Somalia, at 180th, being the most corrupt, and Denmark the least) after moving up from the 148th position it occupied previously.

During the 2015 presidential election campaign, President Muhammadu Buhari vowed to fight against corruption and insecurity if elected. Since his election in April 2015, the anti-graft war remains one of his topmost priority.

In October 2015, the United Kingdom pledged her support for Buhari’s anti-corruption war. However, some Nigerians have described the war as “perfect” while others described it as “selective” while the president has been criticized and accused of leading a selective war against corruption.

Since corruption is a menace that has eaten deep into Nigeria’s polity, some public office holders get arraigned for corruption and money laundering and nothing is heard of the case anymore while some got served, even when as Nigerians, it is believed that such punishments deserve to be stiffer so the offenders can feel the plights of the common man.

Below are 7 of Nigeria’s former governors who have been to prison either within Nigeria or outside the shores of Nigeria for corruption-related offences.

– was a former governor of Edo state and the first Nigerian ex-governor to be convicted of looting public funds. The EFCC charged him with 142 counts of corruption amounting to $24 million (£12m) using front companies. Lucky entered a plea bargain with the commission in 2008 and refunded a fraction of the amount he was said to have embezzled – and went home.

– was an ex-governor of Bayelsa state. He was sentenced to two years in jail in 2007 on charges of corruption and money laundering. He served just days of his sentence after spending nearly two years in detention awaiting trial. Alamieyeseigha was originally arrested in London in 2005, but he skipped bail and escaped back to Nigeria dressed as a woman. He was later impeached on the charges at home and authorities made efforts to seize much of his British property. He was reported to have died of cardiac arrest at the University of Port Harcourt Teaching Hospital on the 10th of October 2015.

– was a former governor of Delta state. He was sentenced to thirteen years in jail by a London Judge for stealing government funds in Nigeria. Ibori was sentenced for stealing at least $250 million of public funds within the period he served as governor of Delta state after pleading guilty to pleaded guilty to ten counts of money laundering and conspiracy to defraud at Southwark Crown Court, London. Ibori was released from prison in December 2016 after a court order. He served only 4 years out of the 13 years he was sentenced to.

He was a governor of northeastern Adamawa state for seven months until May 2015. He was convicted of awarding a contract for the procurement of 25 vehicles at a cost of 167 million Naira ($548,891) without following due process. Ngilari was found guilty of five of the 17 charges levelled against him in September 2016 by the Economic and Financial Crimes Commission (EFCC) and was sentenced to 5 years with no option in fine. His conviction was shortlived because was later acquitted and freed by the Court of Appeal.

– served as Abia State governor from May 29, 1999, to May 29, 2007. Kalu was convicted by the Lagos Division of the Federal High Court on Thursday, 5th of December, 2019 and sentenced to 12 years in prison for N7.65 billion fraud, among other multiple sentences ranging from 3 years to 5 years on 27 counts. He is currently held in custody at the Ikoyi Prisons, Lagos.

– was a former governor of Plateau state. He also served as a senator in 2018. During his time as governor, he was arrested along in London, England on 20 January 2004, with large sums of money. He was accused of stealing about $9m of public funds and money laundering. EFCC, in 2007, preferred 23 counts of money laundering involving alleged diversion of about N1.126billion Plateau State Government’s ecological funds against Dariye. An Abuja High Court in 2018 sentenced Dariye to 14 years imprisonment on the charges of criminal breach of trust and misappropriation of funds (1.6 billion Naira) while he was the Governor of Plateau state. In 2018, Dariye’s 14-year sentence was reduced to 10 years.