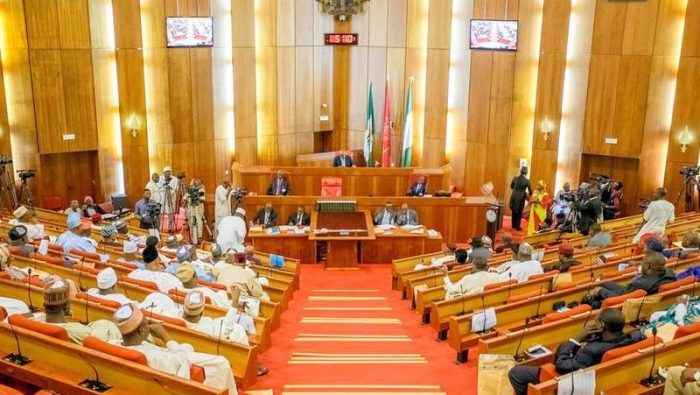 The Senate on Thursday considered a Bill to authorize the sum of N232.8 billion for the Federal Capital Territory Administration (FCTA) for the 2020 fiscal year.

The consideration of the 2020 budget for the FCT comes barely twenty-four hours after the upper chamber received a formal request to that effect from President Muhammadu Buhari.

The Federal Capital Territory Statutory Appropriation Bill, 2020, which was referred by the Senate President, Ahmad Lawan, to the Committee on FCT for further legislative work, was sponsored by the Senate Leader, Yahaya Abdullahi.

The lawmaker recalled that in the 2019 fiscal year, the FCT Administration received an Appropriation of N243,374,511,007 as its statutory budget.

The Senate Leader stated that during the year 2019, a total sum of N120,737,449,084.07 accrued to the Federal Capital Territory as revenue, an amount which, according to the lawmaker, represents “about fifty percent level of performance.”

Among projects to be implemented by the Federal Capital Development Authority (FCDA) in the year 2020 are: provision of infrastructural facilities to districts and road construction in Jahi, Wuye and Karmo with the sum of N6.3 billion; reconstruction and finalisation of Lower Usman Dam and Gurara Road pegged at N1.5 billion, and N3.5 billion for proposed counterpart funding for Greater Abuja Water Supply.

Others are: construction of Cultural Centre and Millennium Tower at N1 billion; rehabilitation and expansion of Outer Southern Expressway from Villa Roundabout to Osex/Ring Road 1 Junction at N1 billion; N1.3 billion for completion of Roads B6, B12 and Circle Road, Abuja, Central Area, and N500 million for the provision of access road to Kabusa Garden.

Senators who contributed to the debate threw their weights behind the approval of the sum budgeted for the FCT in the 2020 fiscal year.

However, some lawmakers such as George Thompson Sekibo (PDP, Rivers East) and James Manager (PDP, Delta South) argued that the FCT budget be presented by the Minister of the Federal Capital Territory to the National Assembly.

Responding to the arguments by both lawmakers, the Senate President explained that going that path would run contrary to the provisions of the 1999 Constitution which allows only a sitting President to present the country’s annual budget to a joint session of the National Assembly.

Lawan also called on the Federal Capital Territory Administration to improve on revenue generation so as to be able to deliver on projects needed to further develop the FCT.

He also charged the Senate Committee on FCT to invite the Minister, Muhammad Bello, so as to review the performance of the FCTA in the 2019 fiscal year.

“On the performance of the previous year, I think our Committee on FCT will be there to represent us.

“I can’t imagine the Committee inviting the FCT Administration, the Minister and his people and not ask for review of performance of the Budget 2019.

“I believe when they (Committee) report to us, they should tell us what happened, including the area of revenue generation.

“On the FCT Minister coming to present the budget, I don’t know the Constitutional details, but I think that is not the only thing that we do differently.

“The laws that were passed with respect to FCT were never presented to us by FCT. What we know State Governors do is they sign the bills to State Houses of Assembly. Our bills come through the Federal Executive Council even if they are directly linked to the FCT.

“I think that is the spirit through which the budget is also brought to us here. Let’s just think for a minute that we go on a joint session for the FCT Minister to address a joint session of the National Assembly, I don’t know because that is what it is going to amount to.”

On funding for security in the 2020 budget for the FCT, Lawan said, “I want to also ask whether we have so much provision in the National Priority budget of the FCT for Security.

“I’ve not seen anything for security here and I’m worried, because I think the security situation in the FCT, not necessarily inside the Federal Capital itself, but the satellite towns where people are kidnapped including one of our royal fathers.

“I believe that we need to look into that, definitely the security needs some attention from us, even if there is no provision. We should be able to prioritize and see which other subheads we can take money from to provide for security.”