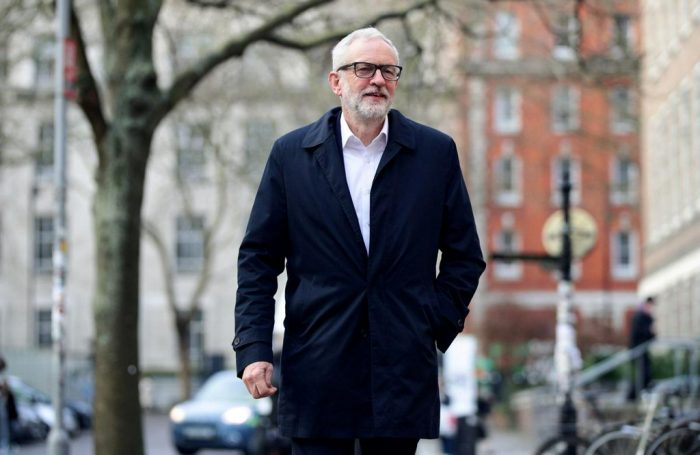 Jeremy Corbyn: His Labour Party hopes for an upset

Various opinion polls have suggested that voters in Britain today will deny the Conservative Party a decisive majority to forge ahead with Brexit as the possibility of a hung parliament looms.

Voting begins at 7 am today. More than 4,000 polling venues across England, Scotland, Wales and Northern Ireland, including a windmill, several pubs, a hair salon and a chip shop, open their doors at 0700 GMT for a day of voting until 2200 GMT.

All eyes will be on the winter weather, with forecasts of near-freezing temperatures, rain and even snow that could affect turn-out in the first December election in nearly a century.

Up for grabs are all 650 seats in the British parliament, which has been deadlocked since the 2016 referendum on EU membership that saw a majority vote to leave.

Prime Minister Boris Johnson, who took over from Theresa May in July after she was unable to get parliament to approve her EU divorce deal, is hoping to secure both a mandate and a majority.

Johnson’s Conservatives need just nine more seats for a majority, which would allow him to push through his own Brexit deal with Brussels and take Britain out of the bloc by the end of January.

Johnson said Thursday was a chance to end more than three years of political deadlock and uncertainty.

“Just imagine how wonderful it will be to settle down to a turkey dinner this Christmas with Brexit decided,” he said in a final message to voters.

But the polls before the poll are not so comforting.

The Telegraph’s final poll conducted by Savanta ComRes shows that the Conservatives’ lead has shrunk to just five per cent – the smallest Tory lead since mid-October, reports metro.co.uk.

The result would give Boris Johnson a tight majority of just six, although the poll predicts a hung parliament as a ‘plausible’ outcome.

Other polls show a higher Tory lead but still show Labour have made gains. The final Opinium survey puts the Conservative Party on 45% and the Labour Party on 33%. This puts the Tories down by 1% and Labour up by 2% compared to company’s previous poll last week.

Opinium predicts one in ten voters are yet to make up their mind on who to back at the ballot box tomorrow and will decide on the day.

Their poll comes after a YouGov survey showed Boris Johnson is on course to win 28 seat majority.

However, this survey also said that a hung parliament was possible when accounting for a margin of error.

Jeremy Corbyn’s party is hoping there will be a late swing in its favour – similar to what happened in the 2017 general election, while the Prime Minister has himself warned the outcome is on a ‘knife edge’.

Tweeting the varying results of the final polls, academic Matthew Goodwin said they showed both a Tory majority and a hung parliament are ‘entirely plausible.’

The latest poll by ICMResearch has the Conservatives with a 6 point lead. But BMG and Panelbase predict a nine point lead, while Kantar predict the Tories are ahead by 12 points.

Mr Goodwin said all suggest that the Conservative Party’s lead ‘has been squeezed’, meaning they might not win the 326 seats they need to form a majority government.

At his last campaign rally before polling day, Boris Johnson said that the race is ‘tight and getting tighter’ He warned against the prospect of a hung parliament led by a ‘Hamas-backing, IRA-supporting, anti-Semitism condoning appeaser of the Kremlin’ – Mr Corbyn.

The Prime Minister’s final campaign day got off to an embarrassing start when he was caught hiding in a fridge to avoid an interview with Good Morning Britain presenter Piers Morgan.

Jeremy Corbyn used this to his advantage in his final rally, telling voters he doesn’t need to hide in a fridge because he is ‘not afraid of questions’.

He urged voters to ‘shock the establishment’ and to back ‘real change’ by voting Labour.

*With reports by AFP and metro.co.uk