Return of the gunmen to Kogi 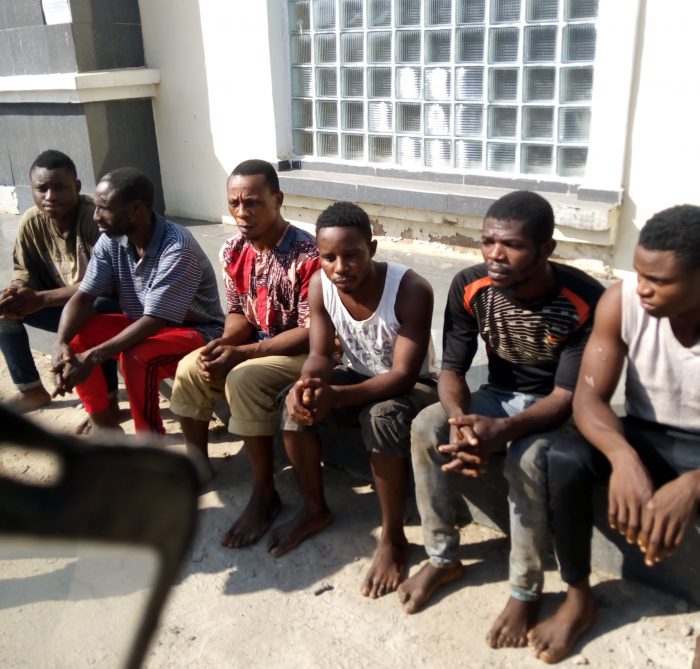 Some armed robbery suspects paraded by the police in Lokoja.

Joseph Apeh was a 400-level student of Kogi State University, KSU, Anyigba. The English/Education student had set his mind and looked forward to a beautiful life after graduation. It was not to be. On Tuesday, 10th November, some two days to his final exam, gunmen traced him to an examination hall in the Faculty of Management Sciences and pumped hot lead into his body. The assailants arrived and escaped on a motorbike. Apeh died same day at KSUTH where frantic efforts to keep him alive did not yield the desired result.

In a statement, the Kogi State Police Command shift blame for his death on cultism. The police disclosed that the deceased was fingered in a previous cult related violence in which about 10 persons were reportedly massacred.

It is end of the year when crime appears more common. But, for the people of Kogi, insecurity seems to have multiplied this season. Until recently the state usually flash a claim of having the least crime in the country. In fact, Alhaji Yahaya Bello Governor of the State, was recently honoured with an award as best governor in security matters. But events in recent times have taken sleep away from many eyes in the Confluence State.

Shortly before the November 16th Governorship election, Alhaji Jaaf, a builder was robbed in broad day light in Lokongoma. He had just entered his office where some visitors were waiting for him. Three young men followed him in and displayed their revolvers. Next, they asked everyone present to submit their car keys. Promptly, about seven keys were so submitted.

Without argument the gun-wielding Intruders then dispossessed their involuntary block-moulder-host of the N700,000 he had just withdrawn from the bank. With such booty in the kitty, they released the seized keys and escaped without much Ado. Alhaji who said he was yet to recover from the shock, described the experience as “just like watching a film.”

Not all victims of the gunmen are lucky enough to recount their encounter. On Sunday, 8th December at about 6:30pm, gunmen seized a portion of the busy Lokoja-Abuja Highway and terrorized many passengers. They reportedly carried out their nefarious activities near Kweita village. Many drivers eventually had to pack their vehicles in order to avoid running into the criminals. With time, a team of security operatives travelling to the FCT dislodged the criminals after a gun battle. Three lives were allegedly lost in the incident.

About a week before the Kweita attack, gunmen had snuffed life out of a Federal Road Safety Corps, FRSC, officer along Lokoja – Okene Road. That was on Friday, 29th November. The operative and a colleague were on their way from Abuja to Lagos when they met the deadly men at Oshawa village, after Zariagi and not far from Lokoja the state capital.

Bisi Kazeem, the Corps Public Education Officer gives further details. “The kidnappers, according to first information report, were said to have opened fire at the sight of the marked vehicle and unfortunately shot the driver in the head, killing him instantly. The vehicle subsequently lost control and veered off the road. It took hours before the rescue team could locate the vehicle in the bush and evacuate the victims.” he said.

The same day, some players of Ifeanyi Uba Football Club escaped death by the whiskers on the same Lokoja – Okene Road. The players were on their way to Kano for a scheduled match with Jigawa Golden Stars when they were waylaid by a band of gunmen dressed in National Youth Service Corps, NYSC uniform at Kabba junction. Chukwuma Ubah, chairman of the club, revealed that no life was lost. “However, the driver was shot while some members of the coaching crew and players were critically injured.”

Armed robbery and similar crimes have steadily been on the increase in the state since around the time of the Governorship election. Phone snatching, break in and stealing are rampant in the neighbourhoods, forcing people not to sleep with their two eyes closed any longer.

Residents and analysts attribute the development to the level of violence that characterised the poll. Pa. Titus Etuh, a retired civil servant captured the perspective. “The way politicians prepare for elections leave much to be desired. Some of them procure guns, cutlasses and other dangerous weapons against their opponents and after election they turn the weapons against the society.”

He may be right. Few days after an irate mob in the guise of celebrating an electoral victory, burnt down a woman politician in Ochadamu, Ofu Local Government Area, the police arrested Ocholi Edicha, one of the arsonists during an armed robbery operation. Some of the suspects owned up to being political thugs in addition to being responsible for many robbery operations in Ochadamu and environs.

Kingsley Fanwo, Director General on Media and Publicity to the Governor says his boss has given directive to the law enforcement agencies to turn the heat on criminals in the state. He said the governor has zero tolerance for crime and will spare nothing to rid the state of criminals and their activities. “The governor is determined to give all necessary support to the security agencies to make them succeed in their onerous work of protecting society.”

Hakeem Busari, Commissioner of Police in the state in a discussion assured that the police is atop of the situation. He said the police is aware that some arms may have found their way into the society from desperate politicians and that “we are working on how to retrieve them.”

For now, the gunmen remain on the loose.