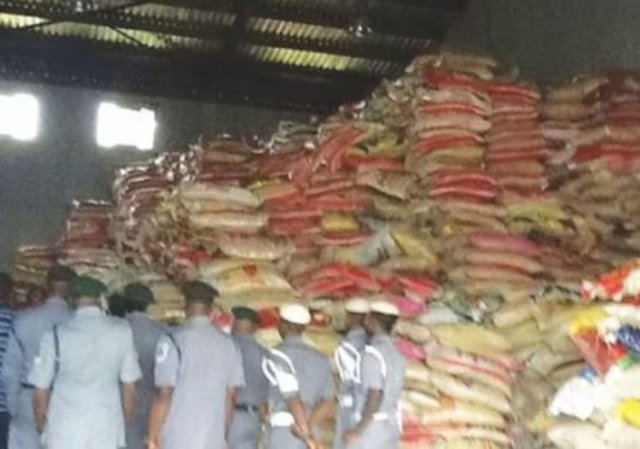 The Seme Command of the Nigeria Customs Service (NCS) says it has intercepted 62 fairly-used vehicles, 28,180 bags of imported rice and others valued at over N1.5 billion in 11 months.

The Customs Area Controller, Comptroller Mohammed Garba, said on Monday that the seized items were smuggled into the country from January to November.

Garba said in a statement by the Seme Command Spokesman, Abdullahi Hussaini, that the seizure was part of the tremendous achievements recorded by the command in its anti-smuggling operations.

He said that the command’s anti-smuggling operations yielded a total of 1,302 seizures with the duty paid value (DPV) of N1.6 billion.

Garba attributed the harvest of seizures to the “strategic policy measures put in place to tackle the menace of smuggling, irregular migrations and other trans-border crimes”.

He said that his commitment was to ensure that smuggling business became unattractive through vigorous community and public enlightenment, sensitisation on the dangers of smuggling and its impact on the economy and national security.

The comptroller urged economic saboteurs to take the advantage of various Federal Government programmes on agriculture such as anchored borrowers for rice farming, Growth Enhancement Support Scheme (GESS) and many others and key into legitimate earnings.

Garba said the command generated the sum of N4.9 billion into the federation account from January till date, representing 76 per cent of its annual allotted target.

He said the grand total for both seizures and revenue stood at N6.5 billion.

The comptroller said that a total of 1,992 parcels of hard drugs and narcotics had been successfully handed over to the NDLEA during the period under review.

He said: “47 suspects were arrested in connection with different kinds of crimes committed, and were handed over to all sister agencies saddled with the responsibility of investigating and subsequent prosecution.

“From the feedback received, some suspects were released on administrative bails, while other cases were still undergoing various stages of trial in courts.

“It may delight you to note that four of the 47 suspects arrested have been convicted, having pleaded guilty to the charges levelled against them by the Federal High Court, Ikoyi in Lagos State.

“We appreciate complaints from stakeholders and border communities for their supports to the command during this period,” he said.

Garba thanked the Comptroller-General of Customs and the management team for their continuous supports and guidance, adding that without them, the command could not have achieved this feat.