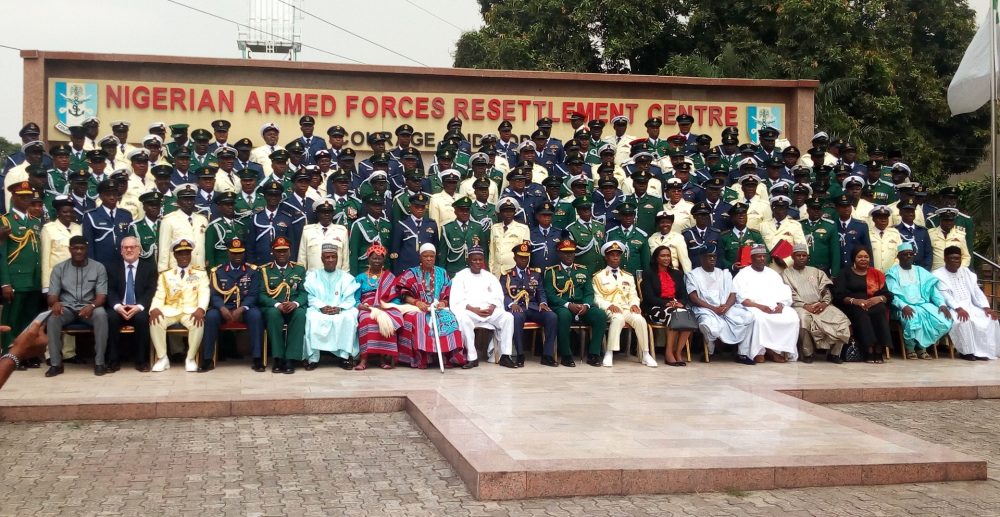 No fewer than 27 mid-level officers, 527 servicemen and women graduated from the Mid-level Officers’ Entrepreneurship and Management Course and NAFRC Trainees Course on Friday.

Retired Maj.-Gen. Bashir Magashi, the Minister of Defence, urged participants and graduands to be pro-active in life in order to face challenges they might encounter.

He said that they should also not abstain from physical exercises and also apply the various skills acquired at the course to better themselves after retirement.

Magashi implored them to uphold integrity, saying that “they should remain focused on duty”.

He said that the institution had been able to achieve the purpose to which it was established.

“This place is already developed, not only developed in terms of structure but in terms of the intention that it was meant to for.

“It was meant to solve the problem of our soldiers who were wounded in the war-front in the early 70’s. We decided to rehabilitate and the centre was fixed.

“I think they have succeeded then and now, they are succeeding further, ” he said.

Commenting on the security issues in the country, the minister said that he was optimistic that Nigerians would soon be happy with the achievements recorded.

“Security has always been a problem in this country for quite a while and I believe we have gone from bad to good one time, now, it is from good to better.

“And very soon, Nigeria people will be very happy with the progress, ” he said.

Air Vice-Marshal Abubakar Liman, the Commandant of NAFRC, urged the graduands to make use of the skills acquired and also uphold professional ethics by being obedient to constituted authority.

“To our dear participants and trainees, I congratulate you for successfully completing your courses of instruction in the centre. I hope it was a memorable and worthwhile experience.

“As I join others in wishing you you a prosperous and healthy future, I urge you to make good use of the skills you have acquired during your stay here.

“The service or society you are going back to expects much from you. It’s therefore imperative that you uphold professional ethics by remaining obedient to constituted authority, ” he said.

He implored participants to utilise the entrepreneurship skills acquired.

Liman commended the tireless and unrelenting strategic direction of the Chief of Defence Staff toward transforming the centre to a reputable institution and the tremendous support to the government.

“Permit me to state that we have enjoyed tremendous encouragement and strategic guidance from the Executive and Legislative leadership as well as the governing board. We are deeply grateful.

“We also wish to recognise the tireless and unrelenting strategic direction of the CDS towards transforming the centre to a reputable institution for the training of officers, servicemen/ women in entrepreneurship and management skills.

“While recognising efforts of past commandants and staff in adding value to NAFRC, permit me to state that the current management team is keen on transforming the centre to a modern training institution.

“That would favourably compete with any type anywhere in the world,” he said.

The participants were introduced to the Agricultural business module in line with the Federal Government policy, they had various workshops auto-mechanic, wielding, photography, soap making etc.

Various projects including the NAFRC hospital, 1200 capacity auditorium named “Buhari Hall” amongst others were also inaugurated by the Special Guest, the Minister of Defence.

The institution plays a crucial role in preparing military personnel for economically useful life after service.