Henry Okah vows to fight on 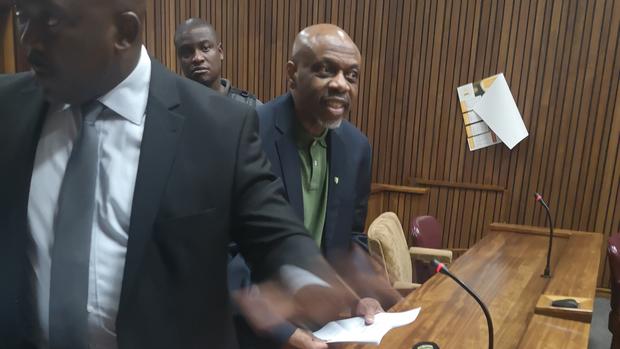 Henry Okah, convicted leader of Movement for the Emancipation of Niger Delta(MEND) was undaunted after he lost yet another court bid for freedom today in Pretoria, South Africa.

He vowed to take the case to the Constitutional Court.

But he was immediately warned by Gauteng High Court, Pretoria judge Moses Mavundla that his next line of action has a scant chance of success.

Mvundla told Okah that the apex court only allowed direct access to it in exceptional circumstances.

The judge told Okah that if he wanted to launch a leave to appeal application against the judgment in the high court, he was welcome to do so in January.

But Okah, who was heavily guarded by armed correctional services officers, said he will “100%” turn to the Constitutional Court, reports iol.co.za

In asking the court earlier this month to declare his conviction on terrorist related charges unlawful and to ultimately set him free, he told the judge: “I am not a terrorist. I am a prisoner of war.”

Okah, who conducted his own case, not only lost his application, but he was slapped with the hefty legal bill, which included three advocates – one of which is a senior advocate – on Government’s side.

He is serving a 24 year prison term after he was convicted in 2013 on several terrorist related charges. It followed the bombings in the Nigerian cities of Warri and Abuja in March and October 2010.

Twelve people were killed during the bombing in Abuja and 36 were injured, while one person was killed and 11 seriously injured in Warri.

He was arrested in South Africa, where he also planned one of the bombings.

His application for the court to declare that he was a participant in a non-international armed conflict and thus protected by the Geneva Convention, was refused by Judge Mavundla.

Okah earlier argued that he is entitled to appear before a tribunal as contemplated by the Convention and that he should have never been tried by a criminal court in this country.