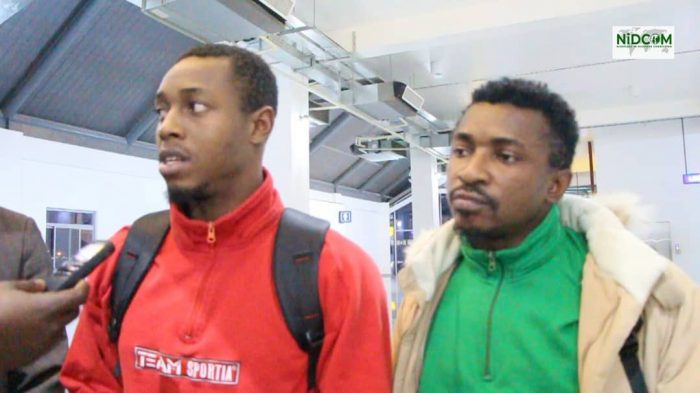 The FUTO students on arrival in Abuja

Two table Tennis players from Federal University of Technology, Owerri detained in Bosnia-Herzegovina refugee camp, have returned home and narrated their ordeal, from the day they were mistakenly arrested by Croatia security and dumped at the Bosnia border.

Abia Uchenna and Eboh Chinedu, both students of Federal University of Technology Owerri(FUTO), returned to Nigeria late on the night of Dec. 20.

The two students were received by the Secretary of the Nigerians in Diaspora Commission (NIDCOM), Mr Sule Yakubu Bassi, who represented the Chairman/CEO of NIDCOM, Mrs Abike Dabiri-Erewa.

The chairman welcomed the students back home and asked them to narrate their ordeal in Croatia, so that some lessons would be learnt from their story and most importantly for Nigerian youths to hear and learn from it.

Uchenna and Chinedu listed among their ordeal while in Croatia and Bosnia-Herzegovina language barrier, harsh and hostile treatment and camp conditions as well as feeding.

They said they were however overwhelmed with joy to be back home.

Dabiri-Erewa also urged Nigerian students to always be of good behaviour wherever they found themselves by obeying the laws of the country they were visiting.

She commended the Federal Government through the Minister of Foreign Affairs Mr Geoffrey Onyeama, the Nigerian Ambassador to Hungary, and all mission staff for the humane and prompt response to the plight of the two Nigerians.

After narrating their nasty experiences in the hands of Croatian authorities, the two students said: ”First of all, we want to thank NIDCOM for the kind gesture they have shown us and the citizens of this great country Nigeria when we were passing through the challenges out in the foreign land.

“We want to thank especially Mama Diaspora in the person of Mrs. Abike Dabiri-Erewa.

”She is indeed a mother – someone that Nigerians in diaspora could depend on.

“The way she spoke to us on telephone from Nigeria when we were in camp in Bosnia was very encouraging,

”We cannot thank her enough, she provided hotel accommodation and feeding when we arrived here in Abuja,” they said.

They applauded the quick intervention of the Minister of Foreign Affairs, Nigeria’s Ambassador to Hungary, and all Embassy Staff in Budapest.

Uchenna and Chinedu arrived Croatia on Nov. 12, to participate in the fifth World Inter Universities Championship, had visas granting them the right to stay until Nov. 18, 2019.

The Inter-Universities organisation confirmed that the original copies of the visas issued by the Croatian authorities to both students was valid at the time of their detention.

The pair, left Pula for the Croatian capital, Zagreb, after the tournament and were supposed to fly to Lagos on November.L

“The night before our departure, on the Nov. 17, we checked out from the hostel and went for a walk in Zagreb,” Chinedu said in an interview.

“Suddenly, we were stopped by the police who asked us for our identification documents.

“We tried to explain that our passports were in the hostel and that we had a regular visa, but they paid no attention to what we were saying .”

The officers allegedly mistook them for undocumented immigrants, put them in a van and transferred them to the border with Bosnia and Herzegovina where, that day, Croatian authorities had gathered a group of migrants who were intercepted as they were attempting to cross into the country.