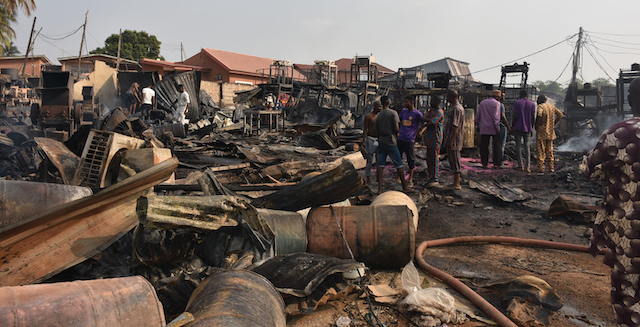 Just for illustration aftermath of a fire incident

Goods worth several millions of Naira were destroyed after fire razed down a section of the Onitsha Bridgehead Market, in Anambra state, east of Nigeria.

The fire gutted heaps of yam tubers, wooden doors and chairs, mattresses, saw machines, crates of soft drinks, amongst other goods in the market.

It was learnt that the fire, which lasted for about an hour, burnt down over 40 shops before it was put off by traders, using fire extinguishers.

No life was lost and nobody sustained any injury.

The cause of the fire has not been ascertained yet.

A victim, Mr Jude Nwufo, who lost wooden doors and chairs, said that the fire started from his section of the market and later spread to other sections

“We suddenly realised there was fire without any sign. We were able to put it off with water and fire extinguishers,” he said.

The affected traders put the worth of the goods destroyed by the fire at several millions of nairs.

Also, Mr Daniel Achu, who lost saw machines, appealed to government for financial assistance to enable them bounce back to business.

However, the President-General of Bridghead Markets Traders Union, Mr Sunday Obinze, told newsmen that they suspected that the fire could have resulted from electrical fault.

Obinze said the executive of the market would review some of its safety measures to avert future occurrence.

He further said that the union would ban the use of naked fire by restauranteurs and smokers inside the market, with effect from January 1, 2020.

“This will be part of measures to avoid a similar mishap in future,” he said