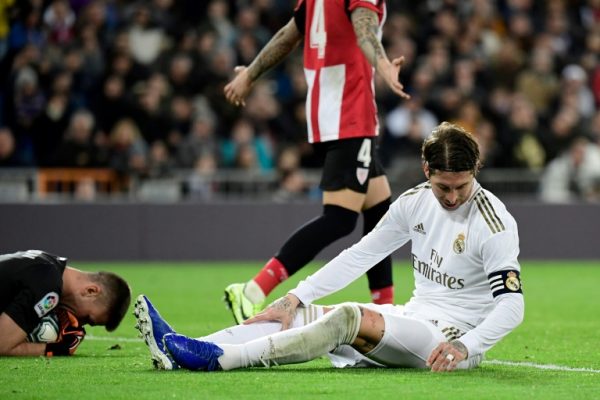 Barcelona now have a two point lead in La Liga after Real Madrid stumbled to a 0-0 home draw with Athletic Bilbao at Bernabeu.

Real also drew 0-0 in midweek at Barcelona but Sunday’s result leaves Madrid on 37 points at the half-way stage of the season, two points off Barcelona who top the table on 39.

Toni Kroos hit the bar, Karim Benzema saw an effort cleared off the line with a back-heel and both Rodrygo and Vincius Junior forced snap saves on a frustrating night for Madrid.

Real defender Eder Militao was forced off after being poked in the eye and his replacement Nacho Fernandez also hit the woodwork.

“It was neither bad luck nor complacency,” Zidane said after the game.

“There’s no reason to get depressed about this, we need to keep calm and keep our heads up.”

“We created lots of chances and if we keep going then they’ll start going in.

“I feel sorry for the players. It would have been nice for them to get more; three points from three games isn’t great.”

For Bilbao, Kenan Kodro’s thunderbolt shot was ruled out for off-side in the first half while the Santiago Bernabeu lived on its nerves when Athletic flooded forward deep into added time with Asier Villalibre almost clinching a winer at the death.