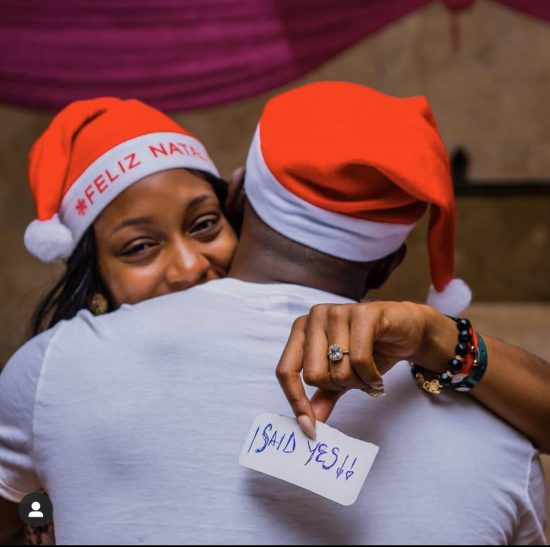 Khafi and Gedoni: are getting married

Gedoni proposed to Khafi on Christmas Day and the later said yes, following in the footsteps of Season Three housemates, Bam Bam and Teddy A.

Khafi posted the good news on Instagram, with a photo of the lovers locked in a bearhug, with Khafi holding a paper sign: “I said Yes”.

“Oh, and I got the best Christmas gift ever”, Khafi wrote from Cape Verde, adding the hashtag #MrsEkpataloading.

Nollywood actress, Lala Akindoju while reacting to the news recalled how she once had a conversation with Khafi on “why she followed a man” while still a housemate of the reality show.

Lala Akindoju who revealed that she told the reality show star that Gedoni was a distraction, recounted how Khafi told her that she found something more than a reality show. She also disclosed that the couple love each genuinely as she prayed for their love to continue growing stronger and stronger.

She wrote; “I remember my first conversation with Khafi when she came out of the Big Brother house…I celebrated everything she did in the house, but I was like ‘why did you follow man’? ‘He was a distraction’!!! She smiled and told me I was wrong, told me she felt she had found something that was beyond a reality show…she then said I should speak with him and assess him on my own.”

“The first thing Gedoni told me was how much he loved Khafi and wanted to make her happy forever. Despite my many questions, he remained graceful….The rest they say is history! I know you both genuinely love each other, so I pray that your love would keep growing stronger and stronger. Congratulations to you both. Love you both,” she added.

OAP Dotun on his part publicly apologised to Gedoni for having a different opinion about him when he started dating Khafi Kareem in the Big Brother Naija House.

Dotun who took to Twitter to congratulate the lover birds said he didn’t like Gedoni in the house because he thought he was a distraction to Khafi, but all of that is in the past now and he is happy for both of them.

“I’ll be honest, I didn’t like Gedoni in the house cos I thot he was a distraction to Khafi & I didn’t think he liked her as such coz of a few bleeps on his side abt them both. Gedoni u are relentless & na man you be. I apologize & u made a very good choice. Khafi is a sweet girl,” he tweeted.

Controversial Big Brother Nigeria Season Four housemate, Tacha took to her Instagram page and posted a picture of the lover birds with a caption;  “NO WAY!! BIG news! I’m thrilled for you both! CONGRATULATIONS BESTIE @acupofkhafi and @gedoni ❤️”

@Elcrucifixio said “Gedoni proposed to Khafi? And she said yes? Just when you think 2019 is done with the Ls, it dishes yet another last minute piper to the “he’s just using her” and “she’s such a fool for sleeping with him” FC. A landslide!! Misogyny 52 – 2 Bitterleaf FC.”

@Cutewalterr said “BBN seems to be producing more married Couples than Shiloh. My Dear don’t take his picture to Shiloh next year just apply for BBN. 😁 Congratulations to Khafi and Gedoni 💃🏼”

@Hiykes77 said “Congratulations to Khafi and Gedoni. I recall during the BBN show, people bad-mouthed this relationship particularly because Gedoni didn’t play to their script, but here we are today wowing at this love story. The best way to shush people up is to do you. To a happy union 😍😘”

@_omoissy said “Gedoni proposed to Khafi and she said yes! Congrats to both of them!Abi I should just go to Big brother and find my future partner!”

@sade1505 said “Congrats Khafi and Gedoni! I remember when they started getting close after that first week in the house and how worried I was. Heck, I was downright scared of Khafi bearing the brunt of the backlash. It’s so amazing to see how far they have come. Love definitely conquers all…”

@best_believe_cr said “Congratulations Khafi! As much as I had/have my reservations, I am inclined to respect your choice. You are a grown ass woman and you do genuinely love Gedoni. I saw how miserable you got when you were not together. Do what makes you happy boo😘. God bless your home!”