London derby: Arsenal bow to Chelsea at the Emirates 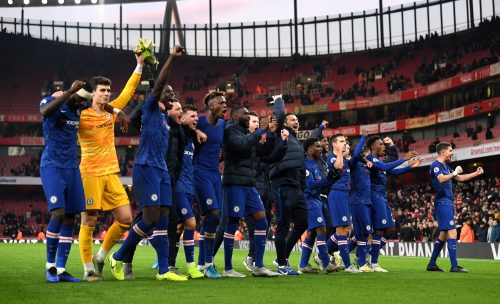 Chelsea have won the London Derby as they defeated Arsenal by two goals to one at the Emirates Stadium on Sunday.

Arsenal started superbly at the Emirates and took a deserved lead through their skipper when Chelsea failed to deal with a corner and Calum Chambers’ flick was headed in by Aubameyang in the 14th minute.

Chelsea were particularly below par in the first half, with their best openings coming from set-pieces.

Arsenal appeared comfortable and was coasting to victory until the goalkeeper Bernd Leno fluffed his lines from a Willian cross and Jorginho made no mistake to make it 1-1 in the 83rd minute.

However, another counter-attack from the Blues, led by Abraham, who combines with Willian before slotting past Leno from eight yards out made it 1-2 in favour of Chelsea.

Four minutes’ brilliance from Chelsea denied Mikel Arteta his first win and also condemned him to a defeat in his first home match as Arsenal manager.

Here are reactions from some Arsenal fans on Twitter:

Arteta has no plan B lmaooooo I'm crying right now.
I'm not wasting my time supporting this wannabe pep.

Thanks for the Bournemouth draw but it's time to go. #ArtetaOut pic.twitter.com/q8lNPcC4RH

That's what we get for hiring someone whose expertise is passing water bottles to Aguero #ARSvsCHE #COYG #ArtetaOut pic.twitter.com/qYcClZMo0m

Here are the tweets from some Chelsea Fans:

Chelsea defeated Tottenham and Arsenal in the space of one week
LONDON IS BLUE 🔵 pic.twitter.com/xj84YzNaWs

I age every time we play but still love this team, London is Blue 🔵❤️