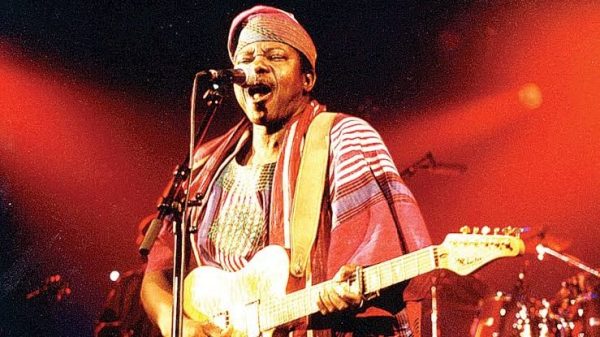 King Sunny Ade (KSA), said he bought his first guitar when he was 16 years old with personal savings and hid the instrument from his family who did not want him to go into music.

The 73-year-old foremost Juju singer, songwriter and multi-instrumentalist disclosed this in Lagos when he met a nine-year-old fan, Temidara Onafuye.

Onafuye, a primary school pupil based in North Carolina, USA, visiting Nigeria for the Christmas and New Year, had said she craved to see Sunny Ade because of her love for his music.

Fielding questions from the young girl, KSA who visited Onafuye at her family’s residence, said while he could play other musical instruments he had a special passion for guitar.

“I have a passion for guitar, I see it as my baby and I cannot do without it.

“Couple of years ago, I was rated 69th best guitarists in the whole world,” KSA, with original name, Chief Sunday Adeniyi Adegeye said

He continued: “I decided to learn how to play the guitar on my own and I bought my first guitar when I was 16 years old.

“I saved money and bought the guitar for myself.

“Eventually. when I bought the guitar I hid it under the staircase.

“I was afraid to tell anybody that I wanted to go into the city for music training where I would be exposed.

Luckily for me, I chose my keys and my style of music which is known as “Juju”.

Juju music is a fusion of traditional Yoruba vocal forms and percussion with Western rock and roll and KSA is acclaimed to be in the vanguard of the development and international popularisation of the genre.

The internationally renowned musician recalled how he played music with the late comedian, dramatist and actor, Moses Olaiya, popularly known by his stage name, “Baba Sala”.

“Hardly do people know that Baba Sala was a musician. He played the guitar, talking drum and his music was like that of IK Dairo.

“When he floated the Baba Sala Travelling Theatre, I was the one in charge of the music section,” he said.

KSA who disclosed that he had composed more than 3,000 songs said all his songs were his favourite because “each of them serves a purpose”.

On retirement, the Juju music maestro said he would play music till his death.

“I wanted to retire some time ago, but my fans all over the world did not allow me.

“They said if I retire, what will I be doing.

“Juju music is in my blood, I cannot retire from music, I can only retire from the stage.

KSA disclosed that he was working on a project of building a standard music school and a museum to document and preserve all genres of music, particularly the early ones.

“I have started building my own school and by the grace of God in a few years, there will be something on ground for people to see.

“I did not study music anywhere and was not trained by anybody but I have a passion for music.

“I look around the entire nation, we do not have a standard music school.

“Most of the Nigerian musicians of note are self-made,” he said.

KSA said the museum would archive all genres of Nigerian early music, images and relics of musicians for young ones like Onafuye to visit and study.

“There is a need for documentation of our music and preserve them, particularly the old ones for the younger generation to study.

“You can imagine a place in Arizona where they have one of the biggest music museums and I have a diary there.

“People go there for tourism and the moment you pass through my stand they will play a bit of my song; “Synchro, synchro system”.

“If a foreigner can do that, why not us? There is a need for us to keep records,” he said.

KSA said he was inspired and impressed to hear that a young girl like Onafuye, who lived abroad could admire his music and be his ardent fan, even with the raving wave of “hip hop” and foreign music.

He said he had to leave all his engagements to honour the young girl when her maternal grandfather, Alhaji Lai Mohammed, the Minister of Information and Culture told him about her.

“I want to thank the Almighty God for allowing us to meet and I thank the minister for getting in touch with me.

“When the minister informed me, I said I will like to see her, and I decided that, even if it is in Abuja, I will pay my flight ticket to see her before she travels back,” he said.

KSA specifically thanked the parents of the girl for nurturing and teaching her African culture, music and tradition, even outside the shore of Nigeria.

Responding on behalf of the family, the minister said he was touched by the visit because very few people of KSA status would leave their busy schedule, especially at a festive season to visit a nine-year-old fan.

Mohammed said he was also impressed with the parents of the girl for impacting African culture in her.

“Today is a special day, not just because Temidara is my granddaughter but because I am also a minister in charge of culture.

“I am very proud that our culture will not die.

“Kids like her are the torchbearers and It means that there is hope for our tradition,” he said.

The minister’s wife, Alhaja Kudirat, the girl’s parents and other members of the family welcomed KSA and thanked him for the visit.

The musician signed his autograph for the young girl and promised to invite her as a special guest to any of his concert in the U.S.