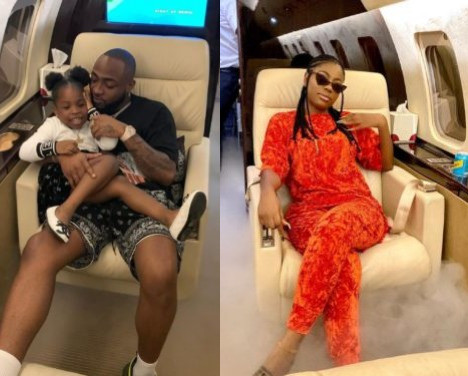 Davido and Nigerian Pop singer, David 'Davido' Adeleke has cleared the air following reports that he took his first daughter's mother, Sophia Momodu for a "holiday" to Ghana as claimed.

Nigerian Pop singer, David ‘Davido’ Adeleke has cleared the air following reports that he took his first daughter’s mother, Sophia Momodu for a “holiday” to Ghana as claimed.

Risky crooner explained that he was traveling to Ghana and since she also had business in Ghana, he gave her a “lift” for their daughter’s sake.

He reminded everyone that he recently proposed to Chioma and pointed out that the false news reports are disrespectful to his fiancee and her family.

He wrote on his Instagram Stories: “I just want to drop a quick comment on the headlines of the silly blogs I’ve been seeing circulate about me ‘taking the mother of first child on a trip to Ghana’ and really wish y’all will quit with it.

“You ALL know that I just proposed to Chioma recently and it would make no sense whatsoever for me to be doing such.

“My daughter’s mother had her business in Ghana with Afrochella selling Imade’s hair products at stalls and I was obviously booked to perform at Afronation. I simply gave her a lift for the sake of Imade who I didn’t want to be left in Lagos without her mom. It was either that or she fly economy.

“I don’t understand why you all would spread such rumours you know would do nothing but hurt my fiance and disrespect her family. 2020 is for positive energy. Get it with it.” 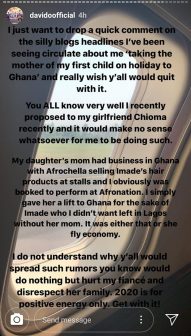