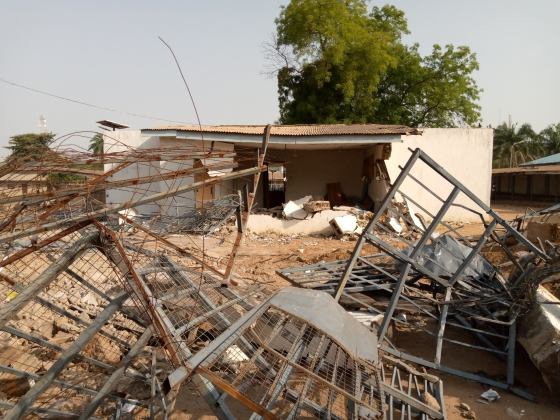 Mixed reactions have continued to trail the demolition of Saraki’s political home known as “Ile Arugbo”.

The Kwara state government early Thursday embarked on the demolition of Olusola Saraki’s property after dispersing protesters who had been keeping a vigil in the area.

The Kwara state government had announced the taken over of the piece of land occupied by the Saraki family in Ilorin, the state capital.

A statement released by the chief press secretary to governor of Kwara state on Friday stated that a new secretariat would be built on the land.

The statement said the land was originally meant for government secretariat and parking space of the Civil Service Clinic but was unlawfully allocated to a private firm, Asa Investments Limited, without any record of payment to the state government.

The statement also said no certificate of occupancy was issued in favour of the firm. Part of the land, situated beside the Civil Service Clinic, is also right in front of the residence of Olusola Saraki, father of the former senate president, who built a house there and named it “Ile Arugbo” (elderly peoples’ home).

“The property had been rightfully allocated to my late father under the name of one of his companies, Asa Investment Limited, since the 1980s and contrary to the claim of the Governor, the land was properly allocated and a Right of Occupancy title issued on it,” Saraki said.

But Saraki’s statement fell on the wrong side of the government who proceeded with the demotion despite protest from Saraki’s loyalist.

Again, we have to revisit the Land Use Act. Apparently, Kwara Governor forcefully carried out the demolition on the ‘revoked’ Olusola Saraki land at midnight and some aged women were attacked in the process. Not good at all. Audible chants of “Ole” . Horrible. pic.twitter.com/ljNS1b84C3

Non of Saraki family stays in ile-arugbo, so demolition of ile-arugbo is not to hurt Saraki but ourselves, Governor has deliberately hurt Ilorin indigen not saraki alone,
God will judge the pains and the tears of old people who goes there for there daily meals will judge. pic.twitter.com/aXRHgLtJee

You are against #10,000 market money to petty trader

You are against FG school feeding program

But you are in support of saraki modern Slavery at ILE ARUGBO.

Seems the only reason the Kwara State governor came to power is to destroy everything Saraki.

This sort of beef is unhealthy. I don't see the governor achieving anything, if all he has come to do is hound Saraki.

I am happy that the illegal property acquired by Saraki dynasty; Ile Arúgbó where Saraki dynasty turned aged women in Kwarans to beggars because of their political enterprise has been demolished.

It will now be used to build Civil Service Secretariat Complex.#KwaraPropertyScam pic.twitter.com/Zt5DrLawyu