Abia says not Banana Republic as it demolishes illegal stalls 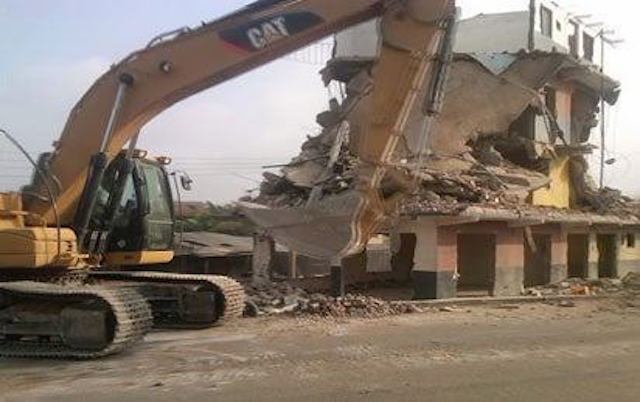 Just an illustration of demolition of illegal structures

Abia government declaring the state not a ‘Banana Republic’ has commenced the demolition of illegal structures at the old Umuahia main market, located at the city centre, otherwise called Isi-Gate.

Hardly had the administration of former Gov. Theodore Orji concluded the demolition of the old market and relocation of the traders to Ubani Ibeku Market, near Umuahia, in October 2013, than trading in foodstuffs, meat, perishables and wears resumed in the area under shanties and makeshift sheds.

Worried by the resultant human and vehicular congestion that characterised the area, government resolved to move the traders to Ubani Ibeku, Orie-Ugba and Amuzukwu markets situated in different parts of Umuahia.

The state government earlier gave December 31 as deadline for the demolition but later shifted the exercise till January 3, while warning the traders through the media to remove their valuables from the area.

The operation, nonetheless, left a handful of the traders aggrieved and downcast, with many complaining that their wares were either looted or destroyed along with the structures.

They claimed to have lost goods and cash worth millions of naira and accused the state government of insensitivity.

The makeshift shops, kiosks and other wooden structures built by the railway and gutters on Umuwaya Road and the adjoining Warri and Ohafia streets were pulled down by the government’s joint task-force.

The demolition was also extended to Eket, Abiriba, Lagos and Bonny streets as well as Owerri Road, among others.

The task force commenced the demolition around 2 a.m. on Friday, accompanied by security men.

Some of the affected traders, whose shops were not situated at Isi-Gate, expressed regrets that the demolition was extended to their streets.

They admitted that they were aware of the government’s warning but said they did not know that their sheds were also targeted for demolition.

One of them, Chief Anthony Ndubuka, who deals in food items, commended the governor for his efforts to give the capital city a face-lift, but decried “the manner the demolition was done.”

“I have been in this shop since 1970. The shops at Abiriba Street were approved by the government, but I was shocked that the same government decided to destroy it without giving us notice.

“I didn’t know that mine would be affected until I received a call by 2:10 am from a neigbhour that my shop was being pulled down.

“Over N50 million worth of goods were looted in my shop during the demolition,” Ndubuka said.

He called on the state government to pay financial compensation to traders who were operating in government approved buildings.

He further urged the government to take immediate steps to ensure that the demolition would bring about the needed beautification of the city.

Another trader, Mr Emmanuel Oko, who sells electrical appliances on Owerri Road, also alleged that goods worth N3.5 million were looted from his shop.

“They broke into my shop and looted my goods, even though it was not on the road or waterways.

“I wonder why mine that is at the centre was demolished while others in the same line were left untouched,” he said, alleging injustice by the government.

Mrs Ugochi Eluwa, who owns a provision store, described the development as a bad new year gift for her.

“I returned from home yesterday (Thursday) where I celebrated the New Year. My goods were looted, most of them were purchased on credit. I’m finished,” she said, crying uncontrollably.

However, Mr Onyebuchi Ememanka, the Chief Press Secretary to the Governor, told NAN that the traders were adequately informed about the demolition, saying that the government was determined to get rid of street trading.

“The traders themselves came to the Government House in their numbers and begged the governor to allow them stay until December 3.

“They should have been pushed out of the place long before now.

“Government says there should be no market or shop at Isi-Gate. They should go to the designated markets in the state capital.

“This is not a Banana Republic where one does whatever he likes,” Ememanka said