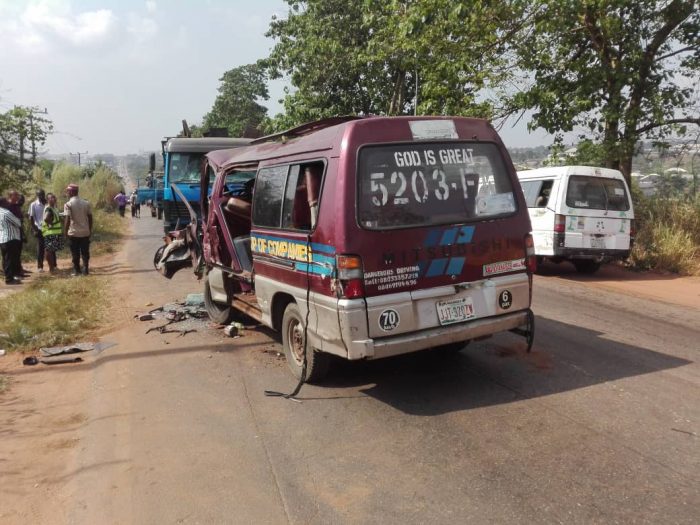 The multiple crash on Enugu-Onitsha expressway on Thursday, Dec. 5

The Federal Road Safety Corps (FRSC) Command in Niger State has confirmed the death of three people in an auto crash on Bida – Kutigi road in Bida Local Government Area of the state.

The state FRSC Sector Commander, Mr Joel Dagwa, made the confirmation in an interview with the News Agency of Nigeria (NAN) on Saturday in Minna.

Dagwa said that the accident which occurred on Friday involved an articulated vehicle without a registration number and a bus with registration SHA 683 XA.

He said that nine people were involved in the accident, but three died while six sustained various degrees of injury.

“We have deposited the corpses at Federal Medical Centre Bida,’’ Dagwa said.

He blamed the incident on speeding and dangerous overtaking.

Dagwa said the corps would continue to monitor road users to guard against dangerous driving in all the major highways in the state.

“We will sustain our ongoing aggressive patrols across highways to ensure that road users adhere strictly to traffic rules and regulations to avoid road accidents,” he said.