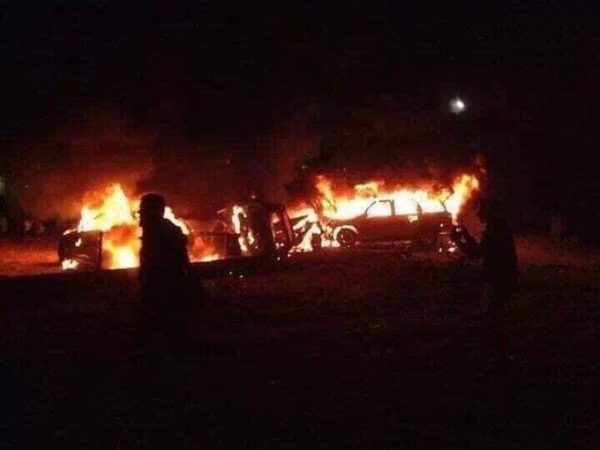 Vehicles burnt in the new airstrike in Baghdad blamed on US

The PMF members were travelling in a three-car convoy north of Baghdad, when the strike occurred, killing six persons, multiple reports said.

Three other persons were critically injured. No one has claimed responsibility for the strike.

But Reuters reported that the Iraqi State TV said the latest strike was also done by the US.

The United States claimed responsibility for the air strike on Friday that killed Iranian military leader, General Qassem Soleimani and the deputy leader of PMF.

One unconfirmed report said Qais Khazali, one of the people the US named as responsible for storming its Embassy in Baghdad, has been killed in the new Baghdad airstrike.

The early Saturday strike came hours ahead of a planned mourning march for Soleimani, who was killed alongside Hashed number two Abu Mahdi al-Muhandis in the precision drone strike.

Trump said the 62-year-old, who had been blacklisted by the US, had been plotting imminent attacks on American diplomats.

His assassination has rattled the region, with Iraqis fearing a proxy war between Washington and Tehran.

A total of five Revolutionary Guards and five Hashed fighters were killed in Friday’s strike near Baghdad international airport.

Their bodies will be laid to rest in an elaborate mourning procession on Saturday, beginning with a state funeral in the capital and ending in the Shiite holy city of Najaf to its south.

The bodies of the Guards will then be flown to Iran, which has declared three days of mourning for Soleimani.

Tehran has already named his deputy, Esmail Qaani, to replace him.

Trump hailed the operation, saying he decided to “terminate” Soleimani after discovering he was preparing an “imminent” attack on US diplomats and troops.

He insisted Friday Washington did not seek a wider conflict, saying: “We took action last night to stop a war. We did not take action to start a war.”

But hours later the Pentagon said between 3,000 to 3,500 troops would be dispatched to Iraq’s southern neighbour Kuwait.

Secretary of State Mike Pompeo praised Washington’s partners in the region, but said their European allies “haven’t been as helpful as I wish that they could be”.

“The Brits, the French, the Germans all need to understand that what we did, what the Americans did, saved lives in Europe as well,” he said.