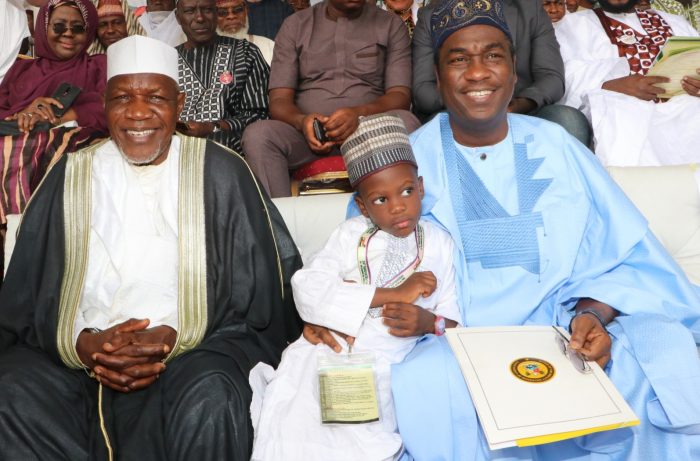 Lagos State Governor, Babajide Sanwo-Olu has emphasized the need to promote an atmosphere of cordiality, tolerance and peace so that government policies and programmes can be successfully implemented.

Speaking on Saturday at the closing/Prize Giving Ceremony of the 34th National Quran Recitation Competition held at the Teslim Balogun Stadium, Surulere, the governor who was represented by the Deputy Governor, Dr. Kadri Obafemi Hamzat stated that Nigeria at this time requires to begin a process of rebuilding adding that it is by tolerating the views of other people that the nation can reach the zenith of its national potentials.

He stated that his Administration will embrace and promote religious tolerance in every nook and cranny of the state.

While describing Islam as a religion of peace, he urged all Muslim faithful to preach and practice peaceful coexistence with individuals of other religious persuasions.

According to him, “With a peaceful society, we are able to practice our religion and adhere to the teaching of the Prophet (SAW) and abide with the dictates of the Almighty Allah. The point to make here is that we must pursue the high end of what our faith demands us – brotherhood of all men.”

Commenting on the Quran Recitation Competition, the governor noted that the lessons Nigerian youths need to learn is hardwork results in rewards and as such they must embrace hardwork to enhance our collective destiny.

He therefore charged the participants and others to consider that the Quran is a way of life which prescribes how to live and relate to one another and should imbibe the teachings, adding that the teachings must be inculcated into our way of life.

He also urged Islamic clerics to use the pulpit as a platform to rid Islam of the misunderstandings the actions of a few have given it.

In his goodwill message, the Gombe State Governor, Alhaji Muhammed InuwaYahaya who was represented by the State Commissioner for Education, Dr. Abu Dairu stated that the competition will enhance unity and promote healthy competition among youths thereby developing their mental faculty.

He added that the state government is committed to sponsoring and the competition because of the educational and spiritual benefit, charging the participants to imbibe all they have learnt during the competition.

He further charged religious leaders in the country to continue to preach peace and teach moral values to youths.

Earlier, the Vice-Chancellor, Usmanu Dan Fodio Univetsity, Sokoto, Prof. Lawa lSulaiman Bilbis called for the support of all tiers of government and private sector support in hosting the national competition. He added that the Institution’s Centre for Islamic Studies is ready to partner with any state government or private organizations willing to sponsor/host the 2020/21 National Quran Recitation Competition.

While congratulating this year’s winners who will be representing the country at the global level, the Vice Chancellor enjoined government and corporate sponsors to support the winners to further their education and provide logistics to enable them participate in international Quran recitation competition.

Also in his address, the President Muslim Community of Lagos State, Prof. Tajudeen Gbadamosi disclosed that the event has been a celebration of the Quran and the people as well a celebration of the bond of the faith and bond of the country adding that the significance of the bonds cannot be over-emphasized especially at a time when internal and external forces threaten to divide the country.

According to him, “I hope we shall continue to cherish the ties that bind us.”