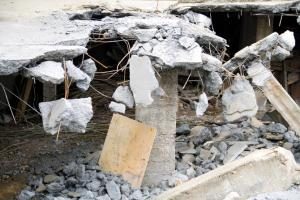 Six persons including a girl were killed and six others injured after an under-construction boundary wall collapsed in the northern Indian state of Uttar Pradesh, police said Sunday.

The wall collapsed in Laxmanpura village of Jhansi district, about 324 km southwest of Lucknow, the capital city of Uttar Pradesh.

“Yesterday a boundary wall of a stone crusher collapsed, following which several people sitting close to it were trapped under its debris,” a police official said. “Five people were killed on spot, while one person succumbed during treatment inside the hospital.”

Six others pulled out from the debris in injured condition were sent to hospital.

Police have registered the case and started investigations.

Uttar Pradesh Chief Minister Yogi Adityanath has expressed grief over the deaths and expressed sympathy with the bereaved families.