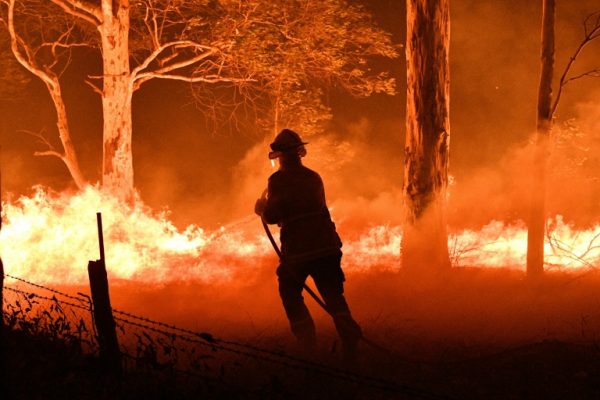 No fewer than 24 people have died in Australia’s bush fires that have raged in the country’s six states since September, with more than five million hectares destroyed.

The latest death was the 47 year-old man, who died of cardiac arrest on Saturday night while helping defend a friend’s rural property in Batlow, south-west of Canberra, New South Wales (NSW).

Hundreds of properties are feared destroyed after bushfires raged overnight in south-eastern Australia following an “awful day” of extreme heat and dangerous conditions.

The full extent of the damage overnight is not known, but authorities have said several hundred properties may have been destroyed and tens of thousands of hectares of land burned.

Power was still out in a lot of areas across New South Wales on Sunday morning, where some 170 bushfires are burning, with two at emergency warning level.

“We are getting reports that the property losses, the damage and destruction, is likely to be numbering in the hundreds as a result of yesterday’s fire activity and fire spread.”

Although the weather eased on Sunday, conditions remained “volatile” at a number of fire grounds, Fitzsimmons added.

New South Wales premier Gladys Berejiklian reflected on the Saturday’s extreme conditions, telling reporters in Sydney that “the weather activity we’re seeing, the extent and spread of the fires, the speed at which they’re going, the way they are attacking communities that have never seen fire, is unprecedented.”

“We can’t pretend this is something we have experienced before. It’s not,” she said at the press conference on Sunday.

In Victoria, where authorities are continuing to conduct mass evacuations with the help of the military, six people remained missing on Sunday as 50 blazes continued to ravage the state’s east – six are at an emergency level.

Cooler weather and light rain forecast for Sunday is hoped to bring some respite to Victoria, where nearly a million hectares of land are burning. About 110 properties were confirmed destroyed in the state this week.

The escalating crisis has been gaining more international attention this week, with Britain’s Queen Elizabeth II sending a message of support to Australia late Saturday night.

“I have been deeply saddened to hear of the continued bushfires and their devastating impact across many parts of Australia,” the queen said in a statement.

“My thanks go out to the emergency services and those who put their own lives in danger to help communities in need.”