"Sugar Rush" serves just laughter and nothing else 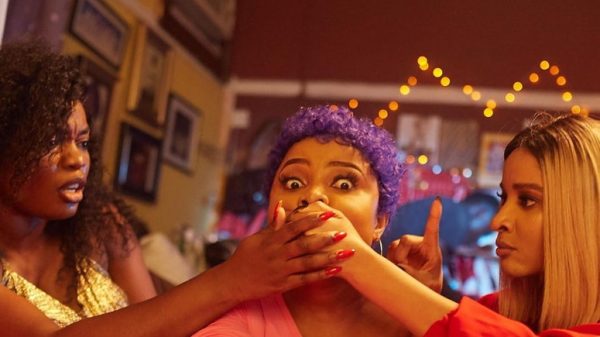 ‘Sugar Rush’ makes the audience laugh but does absolutely nothing else. For a movie with an entourage of producers and cast members, it is amazing how it does little in such a very busy way.

It blindsides one to the real issue at hand and in between bouts of euphoria, it is hard to see the truth. Jade Osiberu served laughter in healthy Instagram doses and for the duration of the film, it was hard to see the loopholes.

This did not last as immediately after the film was over, the only thing audiences remembered was that they laughed so hard. In fact, on social media where the producers have shared fan reactions, the most have been centered on laughter.

It is true that ‘Sugar Rush’ is a comedy but it is also sad that the comedic dialogues and the plot were not written as well as they should have.

Seeing as Osiberu’s previous film ‘Isoken’ was and still fans’ favourite, it was logical to expect ‘Sugar Rush’ to be better written.

The film follows the Sugar sisters (Adesua Etomi-Wellington, Bimbo Ademoye, and Bisola Aiyeola) who accidentally discover 800, 000 dollars in the house of a dead, corrupt man.

In the next couple of days, they spend the money in part only to meet their waterloo when some mafias come forward to claim ownership of the money.

The plot is simple and harmless but largely unintelligent in execution. First, the sisters were spending money that the anti-corruption agency were curious about, in the most lavish way without any prelude to the motivation behind their actions.

The one action that would have made sense to be done first was done last. Second, the actors were not acting.

Adesua was Adesua, Bimbo was Bimbo and Bisola was exactly the same as we had known her since her reality television days. Tobi Bakre tried so hard but still fell flat.

Third, ‘Sugar Rush’ sacrificed crucial social engineering moments at the altar of laughter. It was unwise to have federal anti-corruption agents abduct the Sugar sisters for illegal interrogation given the present situation in the country.

The producers had the chance to present the agency as heroic but they chose to make it idiotic.

On the flip side, some elements worked, especially some special effects and some acting from supporting characters. The star of ‘Sugar Rush’ is media personality and now actress, Toke Makinwa.

It was easy to see how much work she put into the role and the potential she would have if she works with a great director.

While the box office numbers have shown that ‘Sugar Rush’ worked for the market, it does not soften the damage already done.

Thanks to the holiday season and a Christmas Day premiere date, it has made well over a hundred million naira.

Still, the movie would have done loads better if the editing was great enough to save what was left of the writing. (NAN)