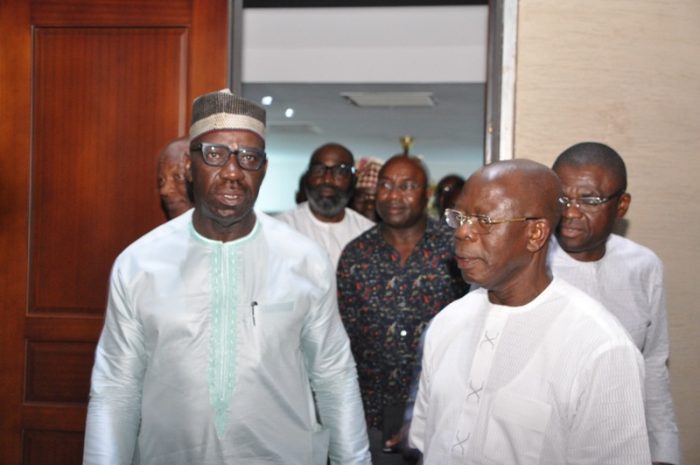 Obaseki and Oshiomhole : a truce in the making?

The fractured branch of the All Progressives Congress in Edo State is ready for reconciliation, its publicity secretary, Pastor Joseph Osagiede said.

He however gave a condition: the truce must be initiated by a neutral body.

Osagiede, who made the disclosure while briefing journalists at the party’s Secretariat in Benin on Monday, said either the presidency or the Benin traditional council should make such move.

According to him, we have already said that we are willing for reconciliation, but we cannot constitute a reconciliation body when you are an interested party in the issue.

“A neutral body from the presidency or Benin traditional council can set up a committee for reconciliation.

He expressed optimism that the crisis in the party at the state level was dying down as the activities of the Edo People’s Movement (EPM), a breakout group of the party, was fading away.

Osagiede said it was expected that the National Chairman of the party, Comrade Adams Oshiomhole should heed to the wish of the Oba of Benin, Ewuare 11 who had called for peace to reign.

“The Oba’s wish is that there should be peace and for Oshiomhole to still be supporting EPM, he is working against the wish of the Oba.

“The National Chairman should take a cue from the Oba and come home, meet with the governor and take him to the Oba and say we have reconciled.