Khadijat or Chioma B? Cardi B wants Nigerians to decide via poll 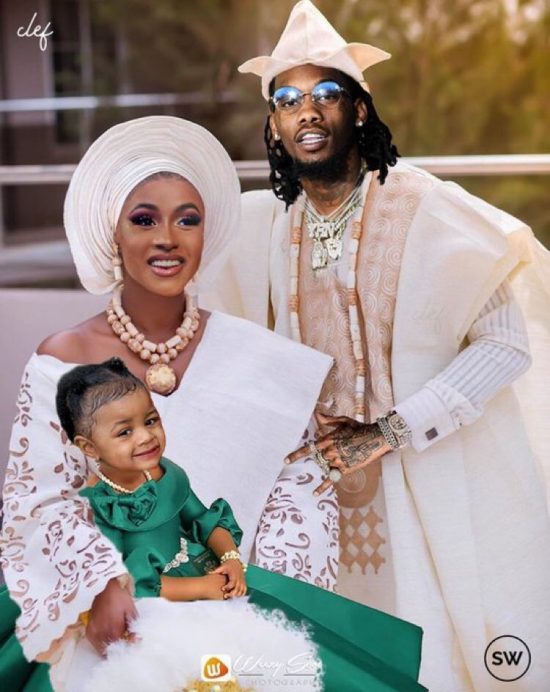 a Photoshopped family album for Cardi B and Offset

US Rapper Cardi B is still pushing ahead with her idea to relocate to Nigeria and today she triggered a new excitement in the social media with a request to her Nigerian fans to decide which name she should adopt between Chioma B and Cadijat(Khadijat).

A fan named Hadiness had tweeted names for the Cardi B family, christening husband Offset as Olayinka, the daughter as Karimat and Cardi B herself as Khadijat. He went further to dress the couple in adorable Nigerian attires.

She now asked fans to do a poll to pick either Chioma B, an Ibo name which she bore when she visited Nigeria early last December or the new muslim name Khadijat, which she now mistakenly spelt as Cadijat.

“Let’s settle this ones (sic) and for all CHIOMA B Or Cadijat,” she tweeted.

The poll is alive and sooner Cardi B will make her choice known.

Cardi B created much excitement in Nigeria last week, when she indicated she may file for Nigerian citizenship. This followed the safety fears expressed by many Americans after Iran threatened to avenge the assassination of Iranian general Qassem Soleimani in an airstrike approved by President Donald Trump.

A Nigerian government official even tweeted she was welcome anytime in Nigeria.

In another tweet, Cardi B asked Nigerians to persuade her husband, Offset to agree to move with her to Nigeria.

Convince him to move with me pic.twitter.com/faeAVMHQBe