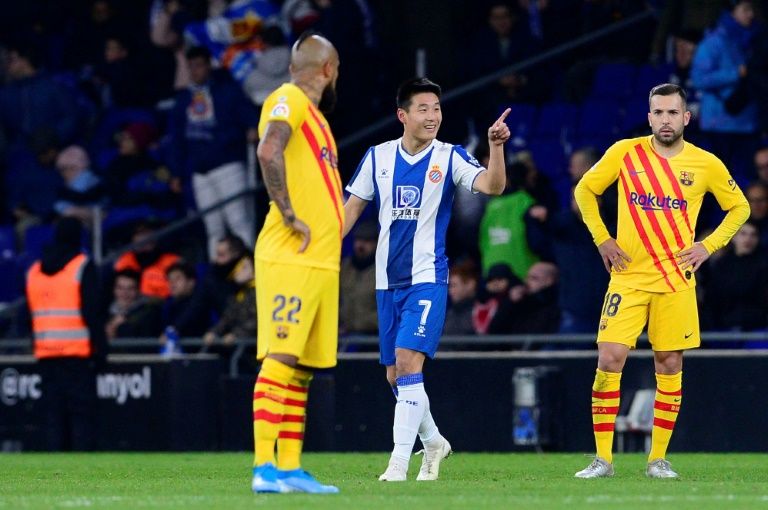 Wu Lei became the first Chinese footballer to score against Barcelona and has revealed how the goal that went viral was planned while he was warming up.

Wu earned Espanyol a dramatic 2-2 draw on Saturday at the RCDE Stadium after he fired in an 88th-minute equaliser to salvage a point in the all-Catalan clash of La Liga’s top against the bottom.

The 28-year-old drove decisively past Barcelona’s stand-in goalkeeper Neto and into the far corner but his goal owed much to a brilliant reverse pass too, executed by his team-mate, Matias Vargas.

Both players had been introduced by new coach Abelardo Fernandez in the second half and Wu said after the match that Vargas had predicted he would give him a chance.

“I am very happy, not just because I scored but because of that assist,” Wu told Espanyol TV.

“When we were warming up, Matias told me he was going to put me in with a through ball. After 10 minutes he played one to me and me scored.”

“Wu has now become the first Chinese player to score against Barcelona in all competitions ever,” state-run China Global Television Network said.

“A new chapter in history has been opened,” it added. “For Wu, it was a night that will live long in the memory.”

State news agency Xinhua said Wu’s dramatic leveller from a narrow-angle “sparked a wave of praise from media and fans in China”.

Wu joined in the celebrations by writing on Weibo: “Wonderful night, a new year, a good start.”

– Chinese Maradona –
The forward, dubbed the “Chinese Maradona” as a youngster, joined Espanyol from Shanghai SIPG in January last year and after finishing top scorer in the Chinese Super League, he said he wanted to prove the country’s players could deliver at the highest level.

“Pressure is my driving force, it’s what pushes me forward,” he said last year.

“I want to show fans around the world that there are players in China who can shine in the best leagues in the world.”

He has stayed true to his word and more than justified his modest transfer fee of 2 million euros.

After making his debut at the start of February, Wu missed only one game for his new club through to the end of last season, playing 21 times and scoring four goals.

This term, he has been even more effective, scoring six goals in 28 appearances in all competitions, despite Espanyol’s poor form that has them languishing at the bottom of the La Liga table.

Yet Abelardo’s appointment seems to have revitalized the team and Wu believes their stirring performance against Barcelona can now be a turning point in their fight against relegation.

“After the game in the dressing room, you could see everyone’s confidence was up,” Wu said.

“It feels like we are going to change the whole dynamic this year. Hopefully, in the next game, we can get the victory because we are gaining momentum.

“We thank all the fans who supported us because they give us unity. We are all a family together.”