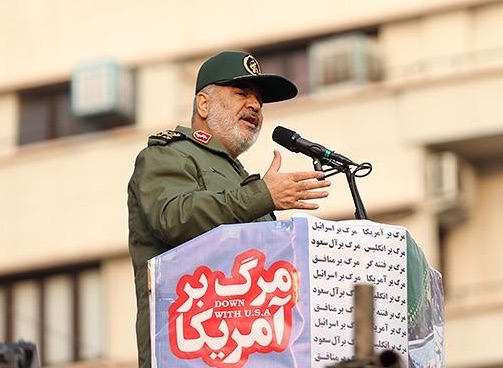 Iran’s Islamic Revolution Guards Corps (IRGC) has warned Washington against any more provocation It also warned its allies not to allow US use their territories to launch a retaliatory attack.

“We warn the Great Satan, the bloodthirsty and arrogant regime of the US, that any new wicked act or more moves and aggressions (against Iran) will bring about more painful and crushing responses,” the IRGC said in a statement on Wednesday. The force is headed by Major General Hossein Salami.

IRGC made the statement after its forces targeted the US airbase of Ain al-Assad in Anbar province, western Iraq, and then launched a second wave of attacks.

“We are warning all US allies who gave their bases to its terrorist army that any territory that in any way becomes the starting point of hostile and aggressive acts against the Islamic Republic of Iran will be targeted,” the statement added.

“We in no way consider the Zionist regime (of Israel) to be separated from the criminal US regime in these crimes,” it said.

The IRGC further urged the American people to call for the return of US forces from the region in order to prevent further losses and not to allow the Washington government to put the lives of American troops at risk any more.

The attack on the US major air base in Iraq came after Iran pledged to retaliate the US assassination of top Iranian anti-terror commander, Lt. Gen. Soleimani.

“Tens of surface-to-surface missiles” were fired at the strategic airbase but the exact number is now known now.

The attack was later confirmed by the US officials.

The strike comes as no surprise since Iran had vowed to take a “harsh revenge”.

Sirens were reportedly heard and American helicopters flew over the airbase and the total alert was activated.

US President Donald Trump was being briefed about the retaliatory strikes.

“We are aware of the reports of attacks on US facilities in Iraq. The President has been briefed and is monitoring the situation closely and consulting with his national security team,” White House spokeswoman Stephanie Grisham said in a statement.