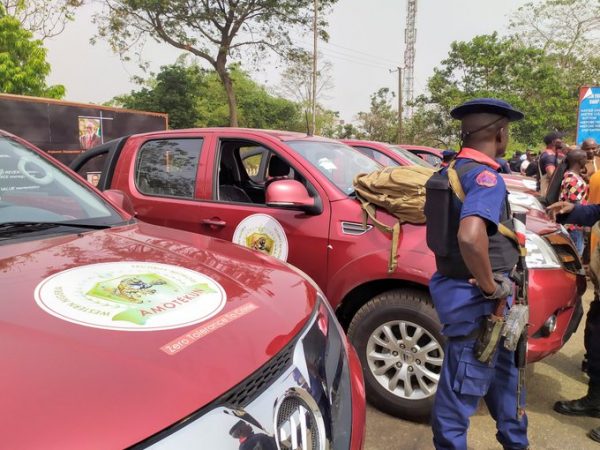 The security outfit has its headquarters in Gbongan in Osun State and will take off with 120 patrol vehicles for the policing of the six states, Lagos, Oyo, Osun, Ekiti, Ondo and Ogun state. Personnel will include hunters, OPC members and others.

Ekiti State Governor, Dr Kayode Fayemi, at the launch today dispelled rumours making the rounds that the security network is a regional police. He said it is more like a community police, which will complement the efforts of the mainstream security outfits.

He said the South west governors were not out to undermine the integrity and sovereignty of Nigeria but were providing the Yoruba people with a “confidence building strategy” to tackle crime and criminality in the region.

“The Western Nigeria Security Network Operation Amotekun is nothing but a community policing response to a problem that our people would like to put an end to. But pending the time that the community policing strategy being put together by the Nigeria Police comes to fruition, it is clearly important that we give our people a confidence boosting strategy.

“So if you ask me, Amotekun is nothing but a confidence building strategy for our people in the western zone. When those elements that are going to work in the joint task force with the mainstream security agencies undertake this assignment, they are going to do it with the knowledge of the terrain, language and culture of the community they are going to work.”

“Amotekun is not a duplication neither is it a replacement for the Nigeria Police Force. Amotekun is a complement that gives our people the confidence that they are being looked after by the people they elected into office. We do not want this to create fear in the mind of any one. We are not creating a regional police force. We are not oblivious of the steps we need to follow in forming a State police. We are law abiding citizens of Nigeria. We know that will require a constitutional amendment and we are not there yet”, he said.

While commending the role played by the mainstream security agencies in tackling kidnapping and banditry in the zone, the governor said Amotekun would reduce the burden on the agencies which he described as “overstretched”.

Fayemi who added that the security agencies have embraced the Western Nigeria Security Network urged Nigerians not to give room for fears which may have emanated from the propaganda circulating in the social media about Amotekun.

” We were daily assaulted by the spate of kidnapping, banditry, armed robbery across the length and breadth of the South West. We obviously sought succour in all the right places and the mainstream security tried their best in arresting the security situation. It was in the context of this development that we lost the daughter of our leader in Afenifere, Pa Fasoranti.

” As elected leaders of our various States, our primary responsibility according to section (14)2 of the constitution of the Federal Republic of Nigeria as amended, is the security and welfare of our citizens and that’s what informed the coming together of my colleagues and I to fashion a way that we can utilise to complement the work of our mainstream security agencies that are quite overstretched in their efforts to curb the menace that has afflicted not just our zone but the entire country at the time”, he said.

The Chairman of the Western Nigeria Governors’ Forum and Governor of Ondo State, Governor Rotimi Akeredolu said the governors are united in their resolve to ensure peace and security in the region.

Akeredolu stated that the south west governors cannot erect “an antagonistic structure whose template is against existing security apparatus”.

He said the ” barbarism” displayed by criminal elements in the region gave the governors grave concern which necessitated the security platform.

The governor stressed that he and his colleagues believed in the unity of Nigeria because the nation’s “strength is in unity”.

Earlier in his welcome remarks, Governor Seyi Makinde had stated that development cannot take place in a state of insecurity.

He added that Amotekun would protect the lives and property of indigenes and non indigenes.

Osun State Governor, Mr Gboyega Oyetola who was represented by his Deputy, Benedict Alabi thanked the service chiefs for their support in tackling insecurity in the region.