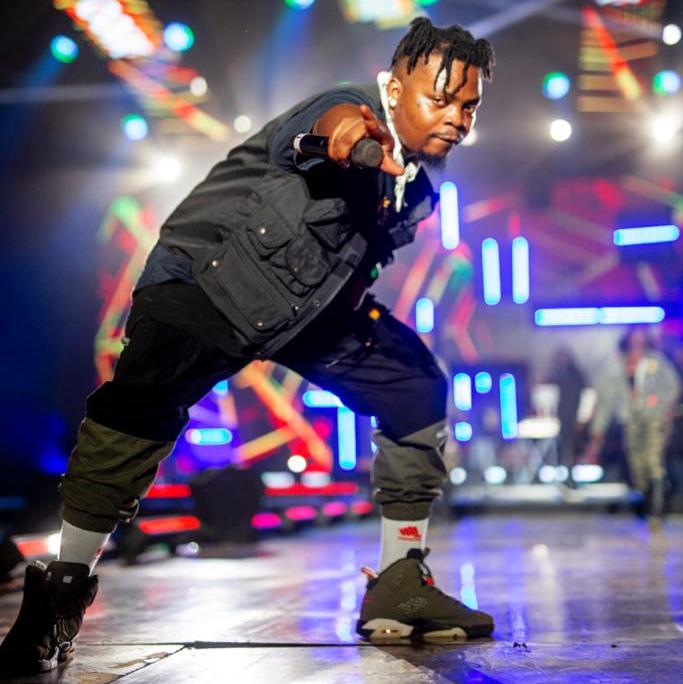 Olamide at the event

The platform which serves as a venue for different events in the busy yuletide season had all-day lined-up events for the scheduled period of December 20-23. It was a daunting task that kept the organisers mostly on their toes.

XChange 100 will crown the events of the season with the Soundcity MVP Awards holding tomorrow, Saturday, January 11 at Eko Convention Centre. The awards is steadily positioning itself as the biggest music rewarding system in Nigeria. Last year, Burna Boy took the concert trophy of the African Artiste of the Year. The African Giant is in contention again for the honour against the likes of Davido, Tiwa Savage, Yemi Alade, Diamond Platnumz, Shatta Wale, Sho Madjozi and Wizkid.

When the consortium birthed in 2018, only three events marked the inaugural edition.  It kicked off with a first of the kind lifestyle award show tagged ‘Spice Lifestyle Honours’. The awards awarded major players in the lifestyle field.

The recipients of the award included Guaranty Trust Bank, Dangote Foundation, Dimeji Alara among others. Award-winning artiste Asa headlined the star-studded show alongside Teni and Adekunle Gold. Other events that marked the edition include the Urban Music Festival, Afrobeat Festival, Wizkid VIP Experience, Wizkid Made in Lagos Shutdown and, of course, the Soundcity MVP Awards.  All of these events were curated to elevate the standard of musical shows in the country and as such, give music lovers and concert goers a good value for their money.

Last year, however, saw the organisers raising the bar. More events were added to the festival which cost N1 billion and had only Tiger Beer as the sole and lead sponsor.

Instead of limiting it to a night revelry, they introduced fashion and lifestyle events that took place during the day. For instance, visitors had the opportunity to sample culinary flavours in the daylight ‘Festival of Flavours’ or explore the fashionistas in them in the fashion experience tagged ‘Xhibit F’. Still on the list of impressive experiences, the organisers held another first of its kind, a sports extravaganza tagged ‘Game On’ on the first day of the festival. There was also a showbiz panel discussion tagged ‘The Intersection’.

But the magic of the festival shone bright at night.  The beautiful layout of the venue, from the elegantly designed stage with the stunning lights and large screens, to the seating arrangement spoke volumes of Adepetu’s shrewdness. The man who can be regarded as the godfather of TV and showbiz events apparently was relentless in achieving the set goals for the festival which included an unforgettable experience.

Orderliness was at the centre of his objectives. There were different entry and exit gates for the different types of tickets. Also, the seating arrangements were different. For instance, the VVIPs and Tables seating area was an elevated platform that allowed guests a clearer and unobstructed view to the activities on stage.

To ensure safety, security agents were mounted outside the gates of the venue for the four days the festival was held. Apart from protecting the festival attendees from petty robbery, they also ensured that the road to the venue was traffic free.

To kick off the festival was the ‘Soundcity All Star Party’ that had the new crop of artistes gradually taking the music industry by storm on stage. They include Mavin Records poster boy Rema, Poe, Fireboy DML and Joe boy.

‘The Urban Music Festival’ returned for the second time on the second day. It was advertised as the biggest urban showcase and had Zlatan Ibile, Niniola, Reekado Banks and Wande Coal who threw the crowd into a frenzy with his set.

Saving the best for the last, Olamide shut down the venue with the ‘Made in Lagos Festival’. In the usual tradition of the superstar street rapper, his arrival on stage was heralded by a handful of performances from both budding and established acts. From Lil Kesh who expressed his respect for him, to Reminisce who was greeted with a loud cheer, to Phyno who put the crowd in a ghost party mode, the festival ground brimmed with happy feet. There was also the talented upcoming act Bimbo Taylor who gave a good rap. She maintained a steady flow of her lines accentuated by sweet rhythms.

Before Olamide finally came on stage, hype man Seye Banks prepped the frenzied crowd with musical hypes. Not a few held their breaths when the ‘Pawon’ crooner emerged. They screamed wildly as his song ‘Anifowoshe’ blared from the speakers. Without wasting time, he launched into a medley, taking the crowd back to some of his old tracks such as ‘Turn Up’, as well as his recent tracks. Once in a while, he stopped mid-performance to hail the streets where he came from and urged the fans not to give up on their dreams.

Despite the late start of the show, the crowd was not eager to leave the Energy City yet. They stayed and partied with the street rap king till they were filled with his musical ecstasy.

With this festival Adepetu is building an enviable legacy that will hardly be challenged in the future.  There are very high expectations that the ante will be raised higher again this year. But what magic can he possibly bring to the scene?