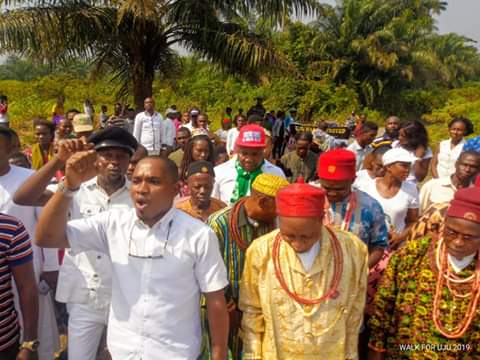 Chief Christopher Amanah, the Paramount Ruler of Uju community leading chiefs and elders on peaceful walk to draw attention to their plight.

Paramount ruler of Uju community in Ogba-Egbema-Ndoni Local Government Area of Rivers State, Chief Christopher Amanah, has led chiefs and elders in a peaceful rally to draw the attention of various levels of government to decayed infrastructure occasioned by an alleged invasion of the community by soldiers three years ago.

During the peaceful rally chiefs and elders passionately appealed to both the State and Federal governments to repair the damaged infrastructure.

Amanah made the call in a press statement signed by a community leader, Chief Kingsley Nwaeze, which was made available to Journalists in Port Harcourt on Thursday.

He said that both the state and federal governments had refused to support the community by awarding contracts for the repair of infrastructure destroyed during the invasion.

Amanah stated that Uju community was destroyed on Dec. 31, 2016 following a military invasion occasioned by inter-cult-related and politically induced clashes.

“Our houses, sources of water, power supply and roads have been abandoned as residents fled the community to take refuge in neighbouring communities.

“We cannot continue to be in exile. We have to return to our land, cultivate and harvest from our soil, we need the government to come to our aid,’’ he said.

The Paramount ruler commended Rivers State Government and the security agencies for their efforts towards the return of peace and stability in the local government area.

When contacted, Mr Bright Abali, Convener, Uju Restoration Initiative, said the community could not remain desolate due to dilapidated houses and other vital amenities for several years after the destruction.

“ We have been forced into abject poverty. We are in a homeless situation”, he lamented.

Abali said that the younger generation of Uju people might never know their homes, if nothing was done by the government and other stakeholders to salvage the situation.

Many communities in Ogba/Egbe/Ndoni local government area were in turmoil following the spate of cult and political-related killings before intervention of the military.