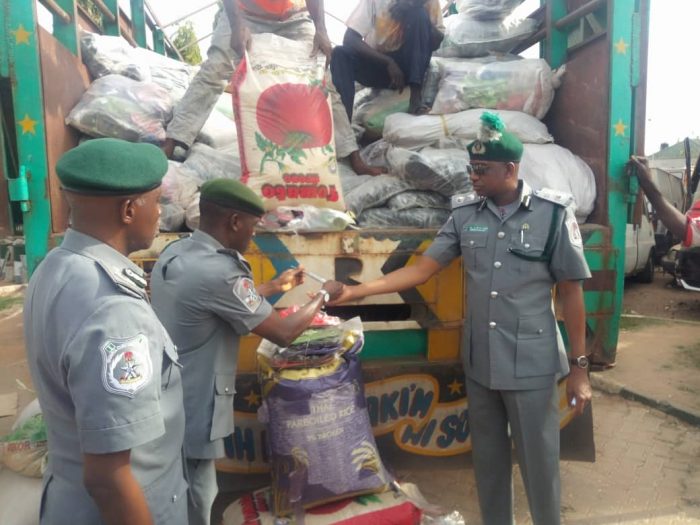 The Nigeria Customs Service (NCS) in Imo, says it intercepted and seized 230 bags of foreign rice and used tyres concealed in a truck loaded with crates of beverage in December 2019.

He said the items with a Duty Paid Value (DPV) of N182 million was seized along Benin axis and Owerri -Port Harcourt Road.

Olusemire said investigation was ongoing to ascertain those behind the nefarious act.

He said that the driver of the truck fled and abandoned the vehicle upon interception by custom officials.

He said some of the items seized by the zone during the yuletide included rice, suitcases, vegetable oil, cartons of toilet soaps and used tyres, saying that customs were not relenting on efforts to rid the borders of smugglers.

“Anyone that sees the truck will think it is carrying just empty crates. But the crates are concealing 230 bags of foreign rice.

“We will continue to intercept and seize smuggled goods as the smugglers would never escape our radar.

“We are mopping up rice in this zone and anywhere we find a bag of foreign rice, we will pick it up,” he said.

Olusemire advised management of companies operating in the country to be careful the kind of persons they employed as drivers, saying that NCS would prosecute the company if it failed to produce the fleeing driver.

The customs’ boss expressed shock that in spite of the dangerous effects of used tyres in the country, some people were still in the business of smuggling them into the country.

“As you can see, almost all the tyres expired since 2011. But our people don’t see any danger in bringing them into the country.

“The statistics we have is that 259 people died of accidents this past yuletide with used tyres being responsible for about 90 per cent of the cause of accidents and deaths.

“Because we have made the importation of rice difficult, they have resorted to bringing used tyres,” he said.

Olusemire advised Nigerians, especially businessmen, to desist from acts that were inimical to the nation’s economy.

According to him, the Nigeria Customs Service is now better equipped, with trained, motivated and mobilized personnel to checkmate smugglers, their agents and collaborators in their nefarious and unpatriotic act.

The controller warned smugglers to have a rethink as the service was determined to rid the nation of prohibited goods.