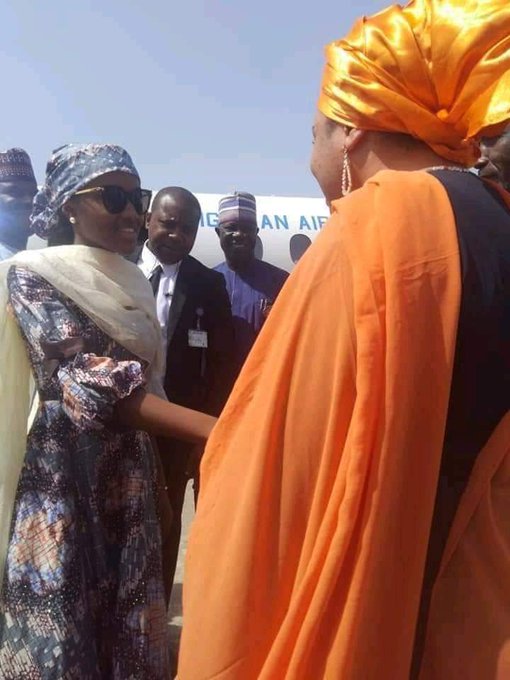 Hanan Buhari, left being received in Bauchi by wife of Governor Bala Muhammed

After general public condemnation of the misuse of Nigeria’s presidential jet by Hanan, President Muhammadu Buhari’s daughter, his media campaign group has floated a new excuse.

In a statement Sunday, the Buhari Media Organisation said Hanan did not fly the jet on a private visit to Bauchi. Rather, she was on an official assignment to represent her father at the Durbar in the town.

BMO however failed to take cognizance of the information that the Durbar was specially arranged for her and she was captured snapping photographs for her portfolio.

Pushing its new spin, Buhari Media Organisation (BMO) said in that circumstance, convention and protocol allowed her to use the aircraft. The organisation asserted that this had happened in the past.

In the statement signed by its Chairman Niyi Akinsiju and Secretary Cassidy Madueke, BMO said the Peoples Democratic Party (PDP) was only playing politics in its comment on the matter. “Even if the opposition party did not fully admit it, members of the First Family are not barred from travelling in a Presidential jet, especially to an official function.

“In any case, PDP lacks the moral right to make this accusation because the party has a record of outright abuse and misuse of Presidential jets in its sixteen years in power at the centre”.

“One instance that easily comes to mind was when some of the aircraft were used to ferry guests for a wedding. This is aside from when a certain First Lady used planes in the fleet for shopping sprees with her friends.

“Now we have a situation where one of the daughters of President Buhari was running an official errand for her father but PDP chose to spin it as a private photography trip. This is a very irresponsible act meant to score cheap political points.”

BMO said it was laughable that PDP, in an attempt to obfuscate recent history, argued that allowing Hanan to travel in one of the planes in the fleet amounts to ‘the worst form of corruption’.

“After years of a fruitless search for dirt on the President, to the extent of making unfounded allegations against President Buhari, PDP now believes it has a smoking gun on corruption in an awkward place.

” Is it not amusing that a party whose officials and members are standing trial on sundry charges of corruption has opted to describe travelling in a Presidential jet as ‘worst case of corruption’?

“Several leading lights of the last administration are standing trial, some have even returned funds that were shared among party members in the run-up to the 2015 election from the $2.1bn arms procurement fund.

“Some electoral officials have also been convicted for benefiting from slush funds shared by former minister of Petroleum Resources, Diezani Allison-Madueke.

“The jury is still out on the $16bn spent on non-existent power projects between 1999 and 2007, yet PDP wants Nigerians to see President Buhari’s daughter travelling to Bauchi in a Presidential jet as ‘the worst form of corruption’.

“Nigerians have not forgotten that one of the phrases that characterized the PDP years is the belief that stealing is not corruption!”, the statement added