"You die for nothing": Takeaway lesson from Al-Nur Mosque (Photos) 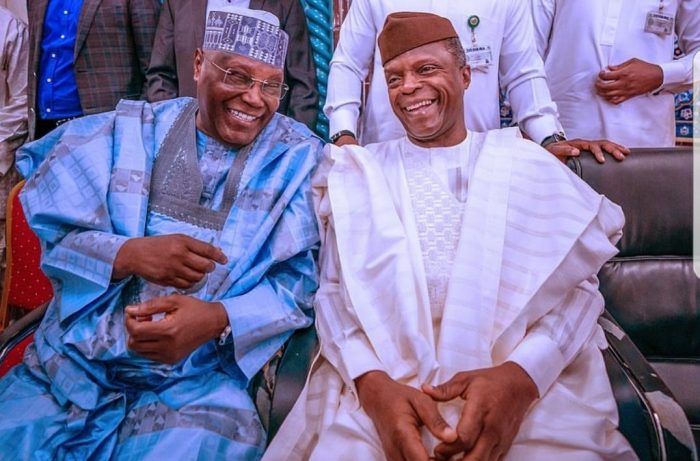 Mallam Nuhu Ribadu, pioneer chairman of the Economic and Financial Crimes Commission scored a major political goal on Saturday when he brought Nigeria’s political and business elites together at the Al-Nur Mosque in Abuja.

They came to attend the wedding of Nuhu’s two sons, Mahmud and Abubakar Sadiq, to their beloved partners, Aminatu Ismaila and Fatima Jijiwa. President Buhari was the only major political actor that was absent, but he was ably represented by a delegation led by Chief of Staff, Abba Kyari.

Luckily, the wedding was held without incident.

However, images out of the occasion offered some sobering lessons to Nigeria’s political followers, who break bottles and kill themselves, all in the name of politics. At the top, the elite ‘Dey Kampe’, to use a pidgin phrase made popular by former president Olusegun Obasanjo. The political elite surely know how to sort themselves out despite superficial differences and acrimony on the political turf.

The truth is ‘there is no fight upstairs’. It’s political ‘make believe’. We cannot but agree with the comment of Oluwaseyi Adeniyi, who posted photos of the wedding showing the dignitaries sharing camaraderie: Today at the Wedding Fatiha of Mahmud Nuhu Ribadu & Amina Aliyu Ismaila, Son of Mallam @NuhuRibadu at The Al-Nur Mosque Abuja. And you think our political elites are fighting? If you allow yourself to be killed all in the name of defending them. You die for nothing”.

This is the takeaway lesson from Al Nur Mosque in Abuja.