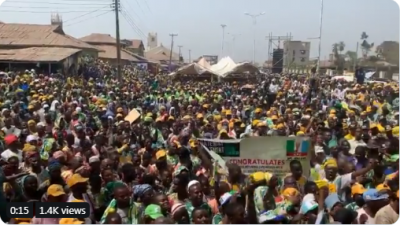 The defectors from ADC and PDP to APC in Ogun

Ogun State Governor, Dapo Abiodun on Tuesday received thousands of defectors from African Democratic Congress (ADC) led by its gubernatorial candidate during the 2019 general elections, Gboyega Isiaka and those from the Peoples Democratic Party (PDP) into the All Progressives Congress (APC).

With the massive defection, Abiodun declared that the APC could now be said to be the only political party in the state.

Some members of the Peoples Democratic Party (PDP) in the state led by the former Deputy Governor under Gov. Gbenga Daniel, Alhaja Salmot Badru, also defected to the ruling APC in the state at the event held at Ake in Abeokuta.

Delivering his speech, the governor, who congratulated the defectors, assured them that they would not be discriminated against in the party as the state was set to achieve greatness.

”We still have some positions in place for those that joined us, everyone should have a sense of belonging. I greet you all from Ogun East, West and Central Senatorial Districts.

”There should be no discrimination, we should start ward meetings, politics have started, we are going to join hands to build the future of Ogun together. We are all one and the same,”he said.

He commended the efforts of the party’s National Chairman, Adams Oshiomohle, describing him as a leader who believes in unity and progress.

The governor promised to ensure that the dividends of democracy were spread across all nooks and crannies of the state.

The State Caretaker Chairman of APC, Yemi Sanusi, while welcoming the defectors, described the event as another milestone in the history of the state, saying that the new members had been working with the APC before now.

Responding on behalf of other defectors, Isiaka said that they share in the belief of social welfarism of the governor.

He noted that the defectors were coming to add value to governance in the state and also believe in the capability and capacity of Gov. Dapo Abiodun.