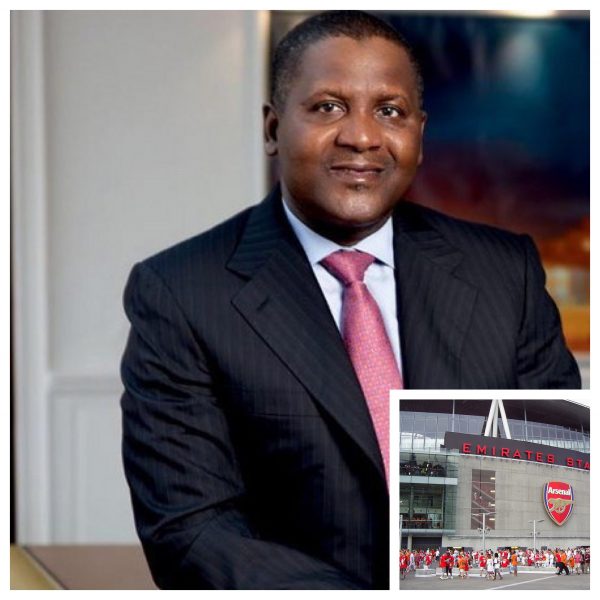 Africa’s richest man Aliko Dangote has once again renewed his interest in buying Arsenal Football Club, for which he has set a target must-buy date in 2021.

In an interview with Bloomberg, broadcast on the most recent edition The David Rubinstein Show, Dangote – who has an estimated net worth of $14.1bn – reiterates his intentions for the Premier League outfit.

“It is a team that yes I would like to buy some day, but what I keep saying is we have $20billion worth of projects and that’s what I really want to concentrate on.

“I’m trying to finish building the company and then after we finish, maybe some time in 2021 we can.

Arsenal are currently owned by Stan Kroenke, through his Kroenke Sports & Entertainment group, with the American having come in for widespread criticism in recent years.

During the last five years, the 62 year-old Dangote has made separate claims, on no less than five occasions, about his interest in leading an Emirates takeover.

Dangote, who is the 96th wealthiest man in the world, according to Bloomberg’s Billionaire’s Index, started his first business at the age of 21 and also founded Africa’s largest cement provider, stated in 2018 his desire to make a move for the North London club in 2020.

Now he has altered his plans, amid a delay with his Dangote Refinery project.

The Dangote Refinery remains under construction in the remote Ibeju-Lekki suburb of Lagos and is expected to be one of the world’s largest oil refineries once complete.

*Originally reported by Mirror of London