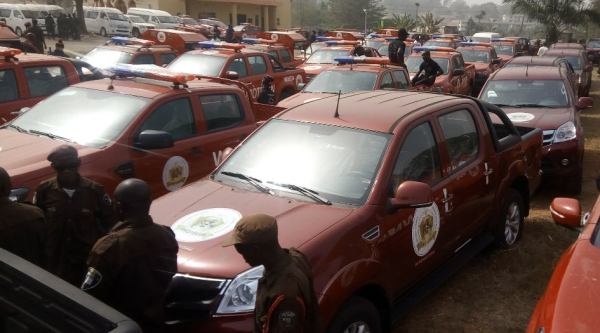 Nigerians on social media are lambasting the federal government after it announced that the launch of a Southwest security outfit, Amotekun is illegal, stating that the issue of security is the exclusive preserve of the Federal Government.

The government in a statement issued by the Nation’s Attorney-General, Abubakar Malami’s Special Adviser on Media and Public Relations, Dr. Umar Gwandu, said the setting up of the paramilitary organisation called Amotekun was illegal and ran contrary to the provisions of the Nigerian law.

He said the Constitution of the Federal Republic of Nigeria 1999 (as amended) had established the army, navy and air force, including the police and other numerous paramilitary organisations for the purpose of the defence of Nigeria.

This is coming days after Nobel Laureate Professor Wole Soyinka has declared his support for the Western Nigeria Security Network, describing it as a pleasant New Year gift that shows that the yearnings of Nigerians prevailed.

In his reaction, Ekiti State Governor, Kayode Fayemi, said the governors in the region would review the matter very soon.

“I don’t have an answer to this individually because I have not been adequately briefed on the new stand. I have just heard of that from you (newsmen) now. I will try to find out the position of the governors of the southwest states. You know I do not speak for the governors. “If what you are saying is true, there will be an appropriate reaction to it,” he said.

However, Nigerians and other civil groups have taken to social media to call out the federal government for the declaration despite that there is a similar outfit in northern region.

Yinka Odumakin, the organisation’s National Publicity Secretary while speaking to the press said Malami is not a court of law that can declare actions of elected governors as illegal.

Afenifere said by opposing the move by the governors to secure their region, Malami is tactically endorsing the killings by rampaging herdsmen in the Southwest region.

See some social media reactions below;

@William_Ukpe said “Amotekun was inevitable. Restructuring won’t happen overnight, it will be a process until we have full regional economic planning. The people angry at Amotekun have Hisbah Police in their region. Nigerian police can’t do shit, because they never stopped Hisnah from moving mad.”

@AriyoAristotle said Amotekun is illegal. Hisbah is legal. S’West Security Network is illegal. Civilian Joint Taskforce is legal. Shame on the governors & every S’Westerners who bought this disaster upon us. SHAME ON YOU ALL.”

Najeebwali_ said, “In all fairness, on what basis should Hizbah exist and Amotekun not?”

@haideendesigns said “I am beyond doubt that whatever doesn’t suit the agenda of the National leader of the APC in the SW won’t be echoed by the online SW ApC guys, AMOTEKUN issues a case study. See how all of them avoided it like a plague.”

@Riam348 said “Sincerely, I don’t see any issh with this operation Amotekun at all if the purpose for which it is created is followed strictly – to assist the security architecture within the SW geo political zone. For me, it’s a welcome development.”

@I_Am_marwa said “What’s the difference between “Amotekun” and “HISBAH”?

Lol! But civilian JTF in Borno State and Hisbah in Kano State are legal while ALL our various State vigilante and estates security men and our various house maiguards are also illegal.”

@SamBolajiSpeaks said “Malami’s position in declaring Amotekun illegal is not surprising. He had to dance to the tune of his kinsmen, the Fulani herdsmen. But it is consoling that a member, of the
@NGRPresident, also a SAN, thinks otherwise.”

@bountymanl said “Now, u can see they don’t really care about us. Herdsmen has not been proscribed for the killing spree. Now States are beefing up security to stop killings and kidnapping. They cannot protect us yet they don’t want us to protect ourselves. Wickedness…”

@EjikeUgobestman said “Amotekun, BSS illegal but Hisba the sharia police is legal even stronger than the so called Nigeria police . Plus a legal 11 Islamic sharia governing states in a federal state. Its high time we destroy this marriage and go our separate ways b4 we get Islamised.”

@sege_shegzy said “Hisbah police is legal, shariah law is legal when we have a federal constitution but amotekun is illegal.”

@obi_Nwosu said “Illegal how? Amotekun was launched in the presence of the entire SW governors including first-class royal father like Ooni of Ife. The FG should have chosen better words.”

@JGagariga said “Does lunching it in presence of Govs from South West makes it legal? The Govs of the South West should go back to the drawing and do the needful to have the AMOTEKUN fully functional, we’re aware there is vested interest in the AMOTEKUN as it destabilizes their secret agenda!”