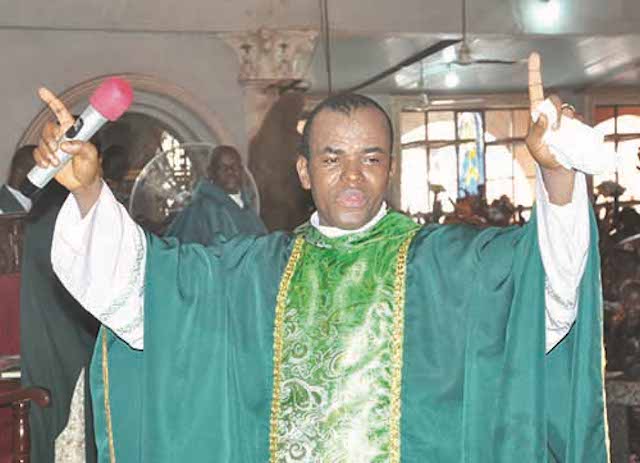 Reverend Father Mbaka: ridiculed as false prophet on Uzodinma has just been proved right by the highest court of man

Never laugh against the “man of God” who claims to pass on divine revelations. That was the lesson the Supreme Court handed over Tuesday night to Emeka Ihedioha, the ousted governor of Imo state.

He had ridiculed Rev Fr. Ejike Mbaka of the Adoration Ministry for predicting that the APC candidate, Hope Uzodinma will take over from him.

In his New Year prediction, Mbaka had said the APC governorship candidate, Senator Hope Uzodinma, will become the governor of the state this year.

“I don’t know the manner the revelation will manifest but no prophecy has ever been declared on this prayer ground without coming to pass.

“He is coming with a new flag to restore the dignity of that noble land. New leadership will break barriers and there would be joy in the land of Imo. Lift your candles as I bless Hope Uzodinma and I empower him spiritually to take over. How, I do not know.”

How will this manifest? How this prediction could ever come to pass, was a riddle people not familiar closely with the case could not fathom.

According to INEC, there was just no hope for Hope Uzodinma in the election as he came fourth overall behind Ihedioha, Uche Nwosu of Action Alliance, whose candidacy was invalidated by the Supreme Court, Ifeanyi Araraume of All Progressives Grand Alliance(APGA). Ihedioha polled 273,404, Nwosu 190,364, Araraume, 114,676 votes and Uzodinma 96, 458 votes. A former governor of the state Ikedi Ohakim, came distant fifth on the log with 6,846votes. INEC also declared that 25,130 votes were cancelled out of total votes of 739,485.

But Uzodinma said he beat them all as his votes were cancelled in 318 units, which ought to have given him additional 236,600 votes, thus bringing his total votes 333,058, more than the 273,404 votes declared for Ihedioha. The claim was his smoking gun that he had deployed vainly at the Governorship election Tribunal and the Appeal Court.

The Supreme Court accepted his prayer and validated the prophecy of Father Mbaka, in a stunning verdict on Tuesday, declaring Uzodinma the validly elected Governor of Imo state.

The court was of the view that the Independent National Electoral Commission (INEC) should not have excluded his votes and returned Emeka Ihedioha as the Governor of the State.

Today, the apex court has given back to Uzodinma the trophy INEC robbed him of and ordered that the votes be added and Uzodinma sworn-in as the governor of Imo state.