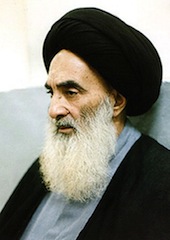 The 89-year-old cleric wields clout in Iraq and his views are closely followed by the country’s politicians.

A team of Iraqi surgeons operated on al-Sistani in Iraq’s southern province of Najaf, the source added.

“He left the operating room a while ago. The operation was successful,’’ the source added without details.

Earlier Thursday, al-Sistani’s office said he had suffered the day before a sprain in the left leg resulting in a fracture in the thigh bone.

Al-Sistani was last seen in public in December when he met with UN envoy to Iraq Jeanine Hennis-Plasschaert amid pro-reform protests in the country.

In late November, Iraqi Prime Minister Adel Abdel-Mahdi, the target of mass street protests, announced he would step down after al-Sistani called on parliament to stop backing his government.

In recent years, special representatives have been reading out on al-Sistani’s behalf his mosque sermons ahead of the weekly Friday Muslim prayers.