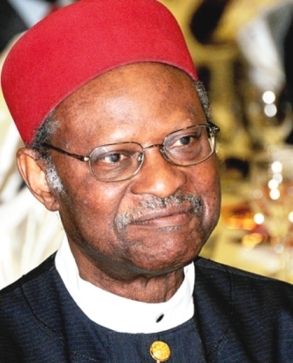 Chief Emeka Anyaoku, former Commonwealth Secretary-General earned the commendation of President Muhammadu Buhari on Friday for his unrelenting projection of Nigeria to the world and ensuring that the world comes to terms with the position of the country on global issues.

Buhari made the commendation in a message felicitating with the great diplomat as he celebrates his 87th birthday on Saturday.

According to the statement by Femi Adesina, presidential media adviser, Buhari joined Emeka Anyaoku’s family and friends to celebrate his exemplary life of dedication to God, country and humanity.

“The President extols Chief Anyaoku’s statesmanship and unwavering conviction on the unity of the country, with his regular encouragement of Nigerian leaders to follow the path of honour in making sacrifices that will secure the future of the country, and be remembered by posterity.

“President Buhari believes the former Secretary-General of the Commonwealth’s discipline and humility is further demonstrated in his acceptance to serve in his community as the “Ichie Adazie Obosi’’ where he is fully involved in mobilizing for civic responsibilities and promotion of positive cultural values.

“The President prays that the almighty God will grant Chief Anyaoku longer life, good health and more strength to keep using his wealth of experience to serve the country”.

Anyaoku, who was born in Obosi, Anambra State on 18 January, served as Commonwealth Secretary-General from 1990 to 2000.

Anyaoku was educated at Merchants of Light School, Oba and attended the University College of Ibadan, then a college of the University of London, from which he obtained an honours degree in Classics as a College Scholar.

After a distinguished period in Nigeria’s foreign service, Anyaoku joined the Commonwealth secretariat on the recommendation of Nigeria’s Prime Minister, Abubakar Tafawa Balewa in 1965. He rose through the ranks to become deputy secretary-general, from where he was appointed Nigeria’s foreign minister in 1983.

He returned to his Commonwealth post after the coup of 31 December, 1983.

Six years after, he was elected the third Secretary-General at the Commonwealth Heads of Government Meeting at Kuala Lumpur.

Chief Anyaoku is married to an Abeokuta princess, Bunmi Solanke and they have four children.