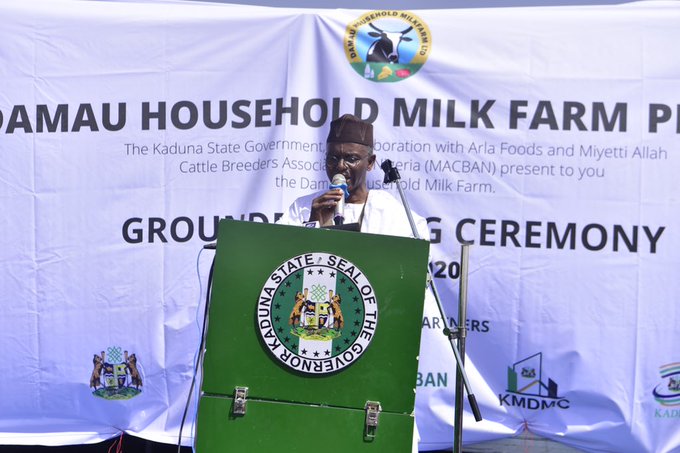 The governor, at the inauguration, said the project was a joint venture between the state government, Danish dairy giant Arla and Miyyetti Allah Cattle Breeders Association of Nigeria.

According to him, it will help expand the national capacity to produce high-quality milk and reduce over-reliance on importation.

He said: “ We regard this as a pragmatic and sustainable solution to security challenges that now accompany the nomadic livestock production.

“The reserve when fully built will have 1000 dairy farmers securing better livelihood in the five districts, with 200 households per district.

“It is with 2,800 cows per district making 14,000 across the five districts, while each livestock farmer will have 5hc of land complete with a farmhouse, cattle shed and irrigated land.’’

He explained that the project is designed to have other facilities including schools, police posts, primary health centres, stores, and markets.

El-Rufai said it is a public-private partnership that will provide solar power and water to the farms.

“The KDSG signed an MOU on Sept. 9, 2019, with Arla food to transform the livestock sector in the state.

“KDSG, with the support of the Central Bank of Nigeria and Arla of Denmark agreed to invest in a project that will create jobs in the livestock sector to promote economic development.

“It will also help resolve security problems by demonstrating a viable alternative to the itinerant method of rearing of cattle and sheep.’’

He noted that they will infuse modern technology into the livestock production, improve yield and empower farmers and replace strife with prosperity

“The Damau farm will be open to every Kaduna State resident, also for people of any ethnicity and religion, to apply and make a living from livestock farming,’’ he said.

He said that same gesture will be replicated in all the gazetted grazing reserves in the state to eliminate nomadic livestock farming, educate the children and empower them economically in modernised dairy production

“The KDSG will also offer Certificate of Occupancy to the 1,000 dairy cattle farmers for their farmland through a sustainable cooperative with access to adequate water.

“While Arla food will also provide the needed commercial services and will purchase, collect, process and bring the local milk to the market

“In the near future, we envisage the emergence of yogurt, water and livestock, cheese and meat production.’’

He commended Denmark for the investment and support and Central Bank for its single-digit interest intervention fund.

In his remarks, the Kaduna State Chairman of the Miyyeti Allah Cattle Breeders Association of Nigeria (MACBAN), Haruna Usman, said it was as good initiative based on the global system of grazing cattle.

Usman called on the Federal Government to replicate such projects across the 36 states to reduce crisis associated with the local grazing method.