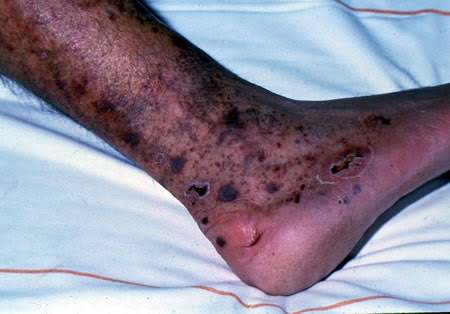 The Sickle Cell Hope Alive Foundation (SCHAF), an NGO, says that Chronic Leg Ulcers (CLU) affects about 10 per cent of Sickle Cell Disease (SCD) patients at one point in their lifetime.

The President of the organisation, Prof. Adeyinka Falusi, made this known on Saturday in Ibadan.

Falusi, a haematologist, said that leg ulcers in people with SCD could be caused by the sickle nature of the red blood cells blocks.

She said that it prevents blood circulation and delivery of oxygen needed for healing of the wound in the affected area.

According to her, leg ulcers are debilitating complication of SCD which can reduce the quality of life of people living with the disease.

“Chronic Leg Ulcer (CLU) is a sore on the leg below the knee region that has lasted for more than six weeks. It is one of the several complications of SCD.

“Leg ulcers in SCD patients are relatively common and can be disabling with excruciating pain; about 10 per cent of SCD patients experience CLU at a point in their lifetime.

“The commonest sites are the ankles as a result of poor circulation of blood which is compounded by sickling healing.

“The ankles normally delay in healing and infection becomes established, the wound may take up to months or years to heal.

“Leg ulcer pain may be severe, excruciating, sharp and stinging,” she said.

Falusi said that due to prolonged course of recovery and high occurrence of morbidity like amputation, prevention of leg ulcer was of utmost importance.

“The major challenges in leg ulcer management in people with SCD are the prolonged course to recovery and the cost of treatment.

“Also, due to the significant pain associated with these lesions as well as impairment which can affect quality of life, it is therefore important to emphasise on preventive measures.

“The most important factor in leg ulcer prevention is patient education on the stringent care and preventive measures which should include limiting frequent occurrence of crisis.

“Careful trauma prevention to the leg will reduce the chance of getting wounds that refuse to heal and avoiding insect bites.

“Eating healthily food, maintaining proper personal hygiene, and drinking plenty of water are some of the preventive measures,” she said.

Falusi, however, advised SCD patients who notice any small wound on their legs should as a matter of urgency visit their doctors for early intervention.

She said that the foundation had spent over N2 million on free treatment and intervention for SCD patients who suffer from CLU.

“The foundation in collaboration with a plastic surgeon and two trained nurses has initiated a Chronic Leg Ulcer Intervention Treatment Programme.

“This is more effective and helps the wound heal faster unlike the traditional wound dressing.

“The first intervention treatment was initiated in March 2016 whereby 19 SCD patients with 26 CLUs were treated free for three months.

“The second intervention treatment was initiated on Jan. 5, 2019 with 13 patients on 21 ulcerated legs.

“Each of the treatment on each leg costs N5,000 every week,” she said.