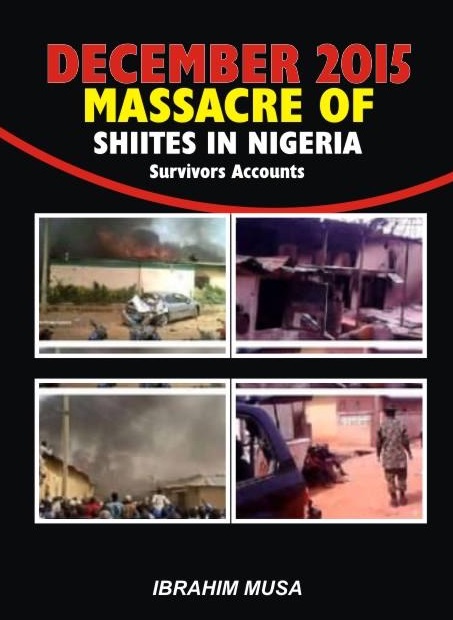 A new book that documents the 12-14 December 2015 massacre by Nigerian soldiers of defenceless Shiites in the Nigerian university city of Zaria has been published.

The book now available on Amazon.com chronicles the stories of 24 survivors of the massacre, including that of the incarcerated Shiite leader Sheikh Ibrahim El Zak-Zaky.

“This book *“DECEMBER 2015 MASSACRE OF SHIITES IN NIGERIA: Survivors Accounts”* sets out to tell the world this horrible massacre from the horse’s mouth”, spokesman of the Islamic Movement of Nigeria and the author of the book, said in a statement on Sunday..

“A flip through the pages of the book reveals the accounts of 24 survivors of the massacre by the Nigerian Army, starting from the incarcerated leader of the Islamic Movement, Sheikh Ibraheem Yaqoub Zakzaky himself.

“These testimonies by survivors was first published and made available for Hausa audience. This vivid translation has been rewritten and rendered into story format, which keeps the reader engaged till the end of the stories.

“Another compelling feature of the book is the inclusion of the testimony the Secretary to the state government (SSG) of Kaduna gave the Judicial Commission of Inquiry (JCI) that was set up by the same government on the crisis. Also included is a brief report the reputable human rights group, Amnesty International brought out after an extensive but meticulous field investigation on the matter. This goes to massively corroborate the accounts of the survivors written in the book.

“Finally, as the author of the book Ibrahim Musa, a veteran journalist said, the aim of the book is to bridge the communication gap that has existed between members of the Movement and Nigerian public in particular and the international community in general over the war crimes committed by the Nigerian Military in Zaria, Kaduna state, I think it will go a long way in doing just that”, Musa said.