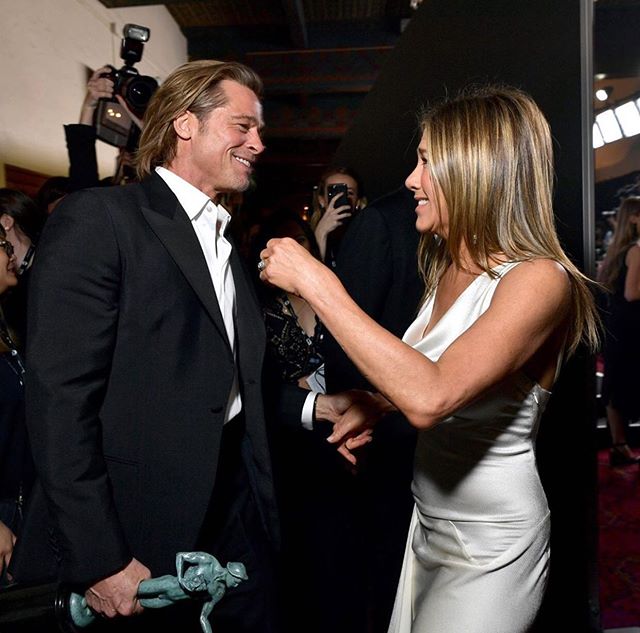 American actor and film producer William Bradley known as Brad Pitt and his former wife Jennifer Aniston are causing a frenzy on Twitter after the duo won Screen Actors Guild Awards at Shrine Auditorium in Los Angeles on Sunday, reunited and shared hugs.

The lovebirds separated in 2005 after Pitt had an affair with co-star Angelina Jolie. They were pictured hugging and smiling at each other as they reunited backstage.

Pitt won the award for the best supporting actor for his role in Quentin Tarantino’s Once Upon A Time in Hollywood. While Aniston took home the award for her work in the Morning Show.

Lol this brad & Jen thing is trending ..& ppl tryiing say how Angelina probably mad..like do y’all not know she left him??? Bcuz he a druunk & wasn’t giving his wife& kids a safe environment to live in lol …

Is everyone really forgetting that Brad Pitt left Jennifer Aniston for Angelina Jolie?!?! Seems like the grass isn’t greener on the other side. pic.twitter.com/S1FOOlnZWz

Brad Pitt and Jennifer Aniston reunited at the SAG Awards and the internet went crazy https://t.co/LjRDvKjZew

the longing for brad + jen is deep down the hope to mend something from the past which we hope was not irrevocably over; it’s not about them so as much as it is about the fantasy that no door is ever closed

Brad and Jen's reunion is literally one of the most iconic moments of 2020 already pic.twitter.com/DhpW9fRVTF

When people wake up and see that Brad and Jen may be getting back together after Angelina Jolie left him. pic.twitter.com/LiXKhRUIkl

No Brad Pitt slander on my tl pic.twitter.com/MB1CT7ooN1