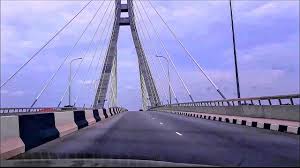 A man has plunged into the Lagos Lagoon from Lekki-Ikoyi Link Bridge in a bid to commit suicide.

Ikechuwku Ibeh, 36, attempted to end his life by jumping off the Lekki Link Bridge on Admiralty way Lekki phase 1 on Tuesday.

Ibeh, who plunged into the Lagoon at about 16:45hrs was promptly rescued by LASEMA’s Marine Unit.

“Upon interrogation, he lamented that his decision to take his own life was as a result of some financial difficulties, depression and diminished reasons to live.

However, the victim was counselled out of the act by the staff of LASEMA and eventually rescued from the lagoon by the Sharks Squad alongside LASWA officials, The Bravo Unit of LASEMA examined him upon recovery for any signs of fractures and self inflicted life threatening injuries and thereafter, he was handed over to policemen at Maroko Police Station for further actions,” the statement said.