George Soros budgets $1b to fight dictators, including Trump 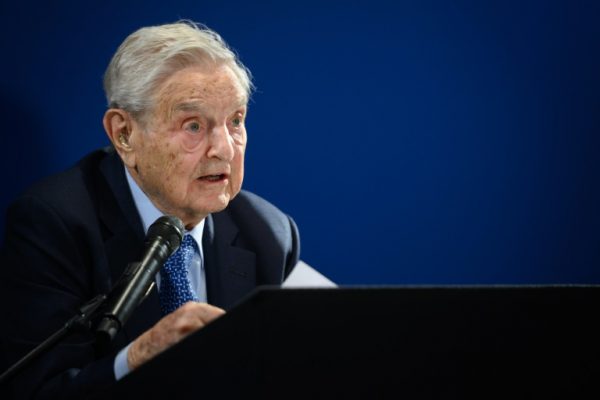 US financier and philanthropist George Soros on Thursday pledged one billion dollars for a new university network project to battle the erosion of civil society in a world increasingly ruled by “would-be and actual dictators” and beset by climate change.

Speaking at the World Economic Forum in Davos, Soros said humanity was at a turning point and the coming years would determine the fate of rulers like President Donald Trump and China’s Xi Jinping as well as the world itself.

“We live at a transformational moment in history. The survival of open societies is endangered and we face an even greater crisis: climate change,” said the Hungarian-born billionaire.

He described the plan of the Open Society University Network (OSUN) as “the most important project of my life” and would be an international platform for teaching and research that existing universities all over the world would be able to join.

It would seek to reach out to “places in need of high quality education and in serving neglected populations” such as refugees, prisoners, the Roma and other displaced peoples like the Rohingya Muslim minority in Myanmar, he said.

“To demonstrate our commitment to OSUN, we are contributing one billion dollars to it,” said Soros in his traditional annual Davos address.

Soros, whose Central European University (CEU) was forced to leave Hungary after pressure from the government of Prime Minister Viktor Orban, said the project was needed at a time when open society was at more risk than ever.

He expressed grief that the world’s strongest powers — the United States, China and Russia under President Vladimir Putin — were “in the hands of would-be or actual dictators and the ranks of authoritarian rulers continued to grow.”

He again slammed Trump, describing the US leader as a “conman and the ultimate narcissist” but said the current surge in economic strength for the United States may have come too soon for the US leader as he faces re-election later this year.

With nationalism making further headway around the world, Soros said that the “biggest and most frightening setback” was in India, accusing Prime Minister Narendra Modi of “creating a Hindu nationalist state.”

He again slammed Trump, describing the US leader as a “conman and the ultimate narcissist” but said the current surge in economic strength for the United States may have come too soon for the US leader as he faces re-election later this year.

“Trump… has managed to overheat an already buoyant economy. An overheated economy can’t be kept at the boiling point for too long,” warned Soros, credited with correctly predicting major market swings in his career as an investor.

“If all this happened close to the election it would have assured his election. His problem is that the election is still 10 months away and, in a revolutionary situation, that’s a lifetime.”

But Soros also expressed particular alarm over Xi, who he said had broken with Communist Party tradition by concentrating power around himself, with the Chinese economy losing its previous flexibility.

While Xi Jinping “became a dictator as soon as he gained sufficient strength” his “success is far from assured” as demographics caused by the one child policy work against China.

He said that most troublingly, Xi was seeking to bring into existence “a new type of authoritarian system and a new type of human being who is willing to surrender his personal autonomy in order to stay out of trouble.”

“Once lost, personal autonomy will be difficult to recover. An open society would have no place in such a world.”