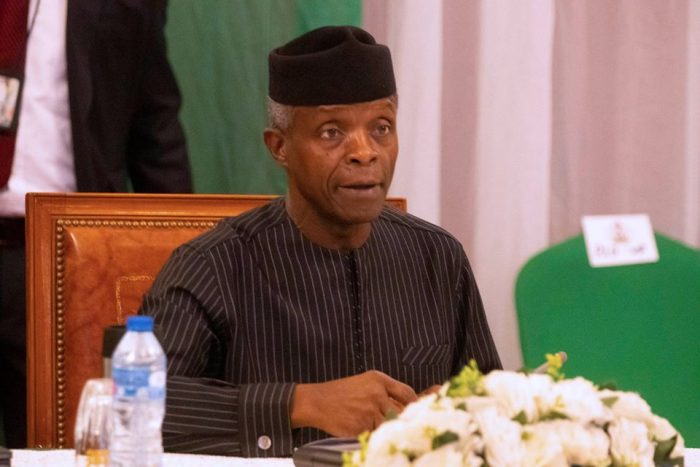 Vice-President Yemi Osinbajo on Saturday asserted that the Finance Act 2020 would stimulate the Nigerian economy and put the country on the path of geometric economic growth.

Osinbajo made the assertion at the Inspiration Conference 2020 of the Redeemer’s Men Fellowship (Lagos Regions) in Lagos.

The conference had as its theme: “Galvanised for Geometric Growth”.

He said the bill, which was signed by President Muhammadu Buhari on Jan. 13, was aimed at shoring up revenue for all levels of government to meet up with their expenditure.

This, he said, was in addition to it supporting Small and Medium Enterprises (SME) in the country.

“The challenges of growing the economy border on creating an environment favourable to businesses and low revenue generation,” Osinbajo said.

He said that the 2020 budget of N10.6 trillion has a deficit of N2.2 trillion, “so it is clear that we are running a fairly large deficit”.

“The sources of revenue are oil proceeds and taxes, and most states do not generate enough revenue to meet their financial expectations,” Osinbajo said.

He cited Adamawa, Benue and Ekiti as some of the states with very low Internally Generated Revenue (IGR), too inadequate to cater for their expenditure.

The vice-president justified the increment of the Value Added Tax (VAT) from 5 per cent to 7.5 per cent, noting it to be very low when compared to other African countries.

“To make things easier for the common man, we have exempted 16 classes of food items, tampons, sanitary towels, and tuition fees from nursery to tertiary.

“Also, before the Finance Act, many companies operating in the country without physical presence escaped taxation.

“Most digital companies made significant revenue from e-commerce, online advertising and the likes, but were not taxed.

“But now, once you have a significant economic presence in Nigeria, but reside anywhere around the world, you are eligible to pay tax,” he said.

Osinbajo expressed confidence in the Nigerian economy, maintaining that the government would continue to provide the enabling environment for businesses to thrive.

He explained that in spite of the perceived low growth rate, the Nigerian economy was still relatively bigger when compared with other African economies.

He stated that the potential of the Nigerian economy has been boosted by agriculture, manufacturing, creative industry, technology and ICT.

“Today, people are using technology to attract investments in agriculture through crowdfunding.

“There are incredible new ways of investing in agriculture in Nigeria, where companies are raising funds for farmers and farming, and such platforms should be invested on,” he said.

Osinbajo also called for more collaboration between the government and the private sector to bridge the infrastructural deficit.

“The Nigerian Liquefied Natural Gas Company (NLNG) and Dangote Group have already keyed into this, while 10 other companies have applied to execute 19 road projects of about 800km,” he said.