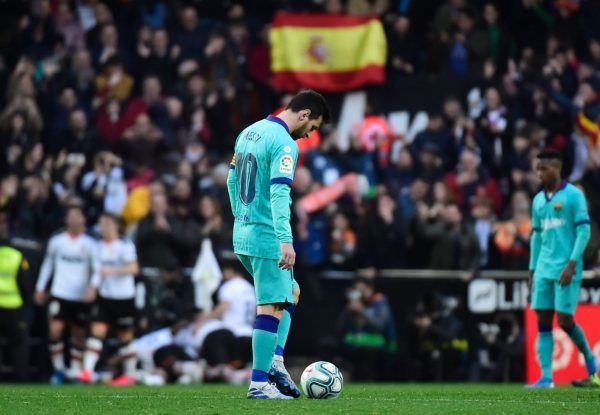 Messi depressed as Valencia humble Barcelona at the Mestalla.

Quique Setien suffered his first defeat as Barcelona manager on Saturday as his side were far from their best and lucky to have lost by 2 goals against Valencia at Mestalla.

Maxi Gomez scored in each half to seal a deserved win for the hosts. It could have been worse.

Marc-Andre Ter Stegen saved an early penalty, and Gabriel had a goal ruled out late on by VAR.

Barcelona were lucky to go in at the break goalless after the opening 45 minutes. Gerard Pique conceded an early penalty on 10 minutes for a foul on Jose Gaya when he was through on goal. However, Marc-Andre Ter Stegen went the right way and saved Maxi Gomez’s spot-kick.

It was not the only crucial save the German stopper made in the first half. He also had to be on hand to deny a Pique from scoring an own goal after a clearance had hit the center-back. He also made a great double stop from Gomez and Kevin Gameiro and denied Francis Coquelin from distance.

At the other end, Barcelona offered very little despite enjoying plenty of possession while just kicking the ball around and struggled to work Jaume Doménech in the Valencia goal.

Valencia got the goal they deserved right at the start of the second half. Some pretty shabby defending ended up with Maxi Gomez shooting from inside the box, the ball taking a big deflection off Jordi Alba and flying in.

Quique Setien sent on Arturo Vidal for Arthur just before the hour and Barca began to finally make some chances.

Lionel Messi looked set to equalise but was denied by a brilliant block from Gabriel and then sent a shot whistling just past the post.

Messi continued to look Barca’s only hope of salvation. He drifted another effort onto the roof of the net, headed an Antoine Griezmann effort wide and forced Domenech into a decent save from a free-kick.

Barca were pushing hard for an equaliser but were undone when Gomez grabbed his second of the day on the counter.

Ferran Torres did well to pick out the striker, and he had time to take a touch before curling past Ter Stegen to seal all three points.

Speaking after the match, Barcelona midfielder Sergio Busquet said: “I think the players have to adapt to the coaching staff’s ideas. There were good things in this game, and others that need to be improved.”