7 Nigerians who have won the Grammy Awards 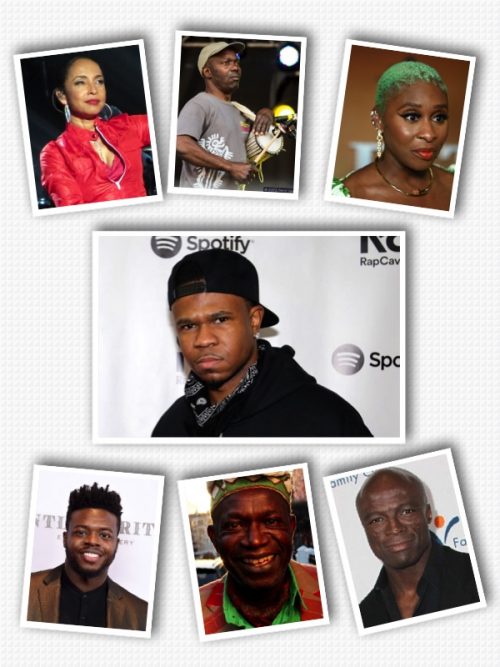 The 62nd Annual Grammy Awards ceremony is scheduled for today January 26, 2020, at the Staples Center in Los Angeles, United States. It will recognize the best recordings, compositions, and artists from October 1, 2018 to August 31, 2019.

He is competing for the award with Altin Gun (Gece), Nathalie Joachim and Angelique Kidjo(Celia).

Expectations are high in Nigeria that Burna Boy will win the Award with his ‘African Giant, multiple award-winning album.

Here are Nigerians who have won the awards in the past:

Sade Adu, British-Nigerian singer, who turned 61 on 16 January, 2020 has been one of Nigeria’s most successful singers. While the likes of Olamide, Davido, Tiwa Savage, Small Doctor, Phyno, and the rest have never dreamt of winning a Grammy Award, Sadu Adu made history as the first Nigerian singer to have won a Grammy.

Born on January 16, 1959, in Ibadan, Nigeria, Sade was raised in London. He had been nominated for the Grammy awards nine times and won four times.

She won her first Grammy in 1986 in the Best New Artist category. She also won the Best R&B Performance by a duo or group with vocals in 1994 for the song, “No Ordinary Love.”

Sade Adu also won another Grammy in 2002 in the category of the Best Pop Vocal Album, with the song “Lovers Rock,” while in 2011, she won the Best R&B Performance by a group with vocals for “Soldier of Love.”

Sikiru Adepoju:
69 year-old Sikiru Adepoju is a percussionist and recording artist from Nigeria, primarily in the genres of traditional African music and world music. He plays a variety of instruments and styles.

Born in Eruwa, Oyo State, Adepoju was a member of Ebenezer Obey’s Inter Reformers Band until he left for the US in 1985. In the US, the ‘drummer boy’ joined O. J. Ekemode’s Nigerian All-Stars, and three months later met Babatunde Olatunji.

He became an integral part of Olatunji’s Drums of Passion, and through Olatunji met Grateful Dead drummer Mickey Hart

Lekan Babalola, born in 1960, is a Nigerian jazz percussionist and musician. Born in Lagos State, Nigeria where he began playing the conga at a young age, he has released seven albums and jointly won two Grammy Awards.

After primary and secondary education in Agege Lagos and Iwo in Oyo state, he left Nigeria for England in 1980 to study automobile engineering at the Chelsea College of Aeronautical and Automobile Engineering.

He however dropped the engineering programme for music and later enrolled at the Central Saint Martin’s College of Art and Design where he studied filmmaking. He later went to to the Northern Film School for a master’s degree.

After crossing the Atlantic to the US, he began his musical career with the Samba Samba Band and later New York City-based Art Blakey’s Jazz Messengers band, where he perfected playing the Bongo drums and performing jazz music. Upon his return to the U.K, Babalola later went on to work with notable acts including Prince, Ernest Ranglin, Branford Marsalis, African Jazz All Stars, Roy Ayers, David Byrne, Damon Albarn, Tony Allen amongst others. In 2006, he won his first Grammy Award for his work on Ali Farka Touré’s In the Heart of the Moon in which he was credited in three tracks. He also won a second Grammy in 2009 for his work on Cassandra Wilson’s 2008 album titled Loverly.

Nigerian-American Hakeem Seriki, better known by his stage name Chamillionaire is a rapper, entrepreneur, and investor from Houston, Texas. He was born November 28, 1979 in Washington D.C to a Muslim Nigerian father and an African-American Christian mother. He moved to Houston, Texas at the age of four

He began his career independently with local releases in 2002, including the collaborative album Get Ya Mind Correct with fellow Houston rapper and childhood friend Paul Wall. He signed to Universal Records in 2005 and released The Sound of Revenge under Universal. It included hit singles “Turn It Up” featuring Lil’ Flip and the number-one, Grammy-winning hit “Ridin'” featuring Krayzie Bone of Bone Thugs-n-Harmony. The song won the Grammy in 2007 for Best Rap Performance by a Duo or Group. It was also nominated for Best Rap song.

Chamillionaire is also known for his most anticipated Mixtape Messiah series, which ran from 2004 until 2009.

He currently serves as the CEO of Chamillitary Entertainment. Chamillionaire was also the founder and an original member of the Color Changin’ Click until the group split in 2005.

He was born in Owensboro, Kentucky, to Nigerian-born Oluwole Olusola, a psychiatrist, and Grenadian-born Curline Paul, a nurse.

Olusola’s parents discovered his musical talent when he was six months old and decided to put him in music lessons. He started the piano at age 4, the cello at age 6, and alto sax

Olusola is best known as the beatboxer of the vocal band Pentatonix. After the group won NBC’s The Sing-Off in 2011, they released five albums, which all charted in the top 5 of the Billboard 200 charts, have sold over 2 million records, and have amassed more than two billion views on their YouTube channel.

His group won the Grammys in 2015 and 2016 for Best Arrangement, Instrumental or A Cappella. The group also won in 2017 for Best Country Duo/Group Performance for the song Jolene, which featured Dolly Parton.

At Yale, Olusola planned to pursue medicine and finished all his pre-med requirements. He started as an academic music major, but decided to switch to East Asian Studies after being introduced to China through a 10-day Chinese government sponsored trip for 100 Yale students.

He is a British-Nigerian musician, singer, and songwriter. He has sold over 20 million records worldwide, with his first international hit song, “Crazy”, released in 1991; his most celebrated song, “Kiss from a Rose”, was released in 1994.

He is one of the most decorated of musicians with Nigerian background.

He was born on 19 February 1963 at St Mary’s Hospital in Paddington, London, to Nigerian mother, Adebisi Ogundeji, and Afro-Brazilian father, Francis Samuel. He was raised by a foster family in Westminster, London.

Seal married the German model Heidi Klum in 2005 but divorced in 2014, after four kids.

He had been nominated 14 times for Grammys and won four titles.

He won Record of the Year and Song of the Year in 1996. He also won Best Pop Collaboration with Vocals in 2011. Last year, his song Standard was nominated for Best Traditional Pop Vocal Album.

Cynthia is multi-talented. Apart from picking awards in theatre and cinema, she also won a Grammy Award for Best Musical Theater Album in 2017 for Colour Purple.

Nigerians nominated for the award in the past:

King Sunny Ade: The 73 year-old African beats singer first got nominated for a Grammys in 1984 for his Synchro System album. It was in the category ‘Best ethnic or traditional folk recording’.

In 1999, KSA was nominated again for Best World Music award, this time for his Odu album.

Earned nomination in 2003 for his album ‘Fight to win’.

Femi Kuti’s younger brother was nominated in 2018 for his work ‘Black Times’.

Michael Babatunde Olatunji, Nigeria’s most accomplished drummer who died on April 6, 2003 was nominated in 1998 for Love Drum Talk.

Olatunji who was born in the village of Ajido, near Badagry, Lagos State, moved to the United States on a Rotary International Scholarship in 1950. Educated at Morehouse College in Atlanta, Georgia and New York University, Olatunji began his music career by starting a percussion group to make money to fund his studies.

He built a great following among Jazz musicians and had collaborations with many artistes such as John Coltrane who wrote the composition “Tunji” on the 1962 album Coltrane in dedication to him. Olatunji recorded with many other prominent musicians (often credited as “Michael Olatunji”), including Cannonball Adderley (on his 1961 African Waltz album), Horace Silver, Quincy Jones, Pee Wee Ellis, Stevie Wonder, Randy Weston, and with Max Roach and Abbey Lincoln on the pivotal Freedom Now Suite aka We Insist!, and with Grateful Dead member Mickey Hart on his Grammy winning Planet Drum projects. He is also mentioned in the lyrics of Bob Dylan’s “I Shall Be Free” as recorded on the album The Freewheelin’ Bob Dylan.

Nominated for Best World Music Album for his work, African Giant. Will he win?