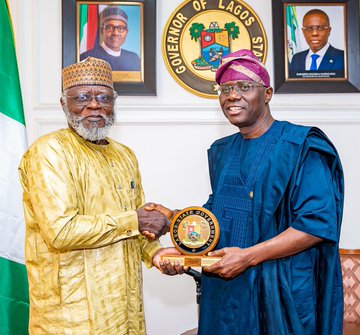 Lagos State Governor, Babajide Sanwo-Olu, has said his administration will not waver in its support towards the effort by the National Drug Law Enforcement Agency (NDLEA) to rid the State of traffickers dealing in hard drugs and narcotics.

The Governor, who described the menace of hard drugs on the country as “injurious”, said the country would be the end loser in human capital index if there was no deliberate effort to stop productive population from having unfettered access to destructive substances that ravage human nervous system.

Sanwo-Olu called on all arms of the Government and relevant agencies to support the NDLEA’s effort in curbing the trafficking and sale of harmful narcotics across the country.

The Governor spoke, on Thursday, while receiving the national leadership of the NDLEA led by its chairman, Col. Muhammad Mustapha Abdallah (rtd), on a courtesy visit to the State House in Alausa.

Sanwo-Olu noted that the NDLEA’s assignment was a difficult task that required tactics and professionalism to deliver, due to the level of penetration of syndicates trafficking harmful drugs.

Lagos, the Governor said, has not been insulated from the damaging effects of the indiscriminate consumption of hard drugs, which necessitated the NDLEA to establish eight operational bases across the State.

Sanwo-Olu said: “The menace of drug abuse is something that Government must face seriously. We know the effect of intake of harmful substances in the society, families and even outside the country. We need to curtail this negative trend and educate our people on the effect. Some found themselves using hard drugs due to peer pressure; some by sheer coincidence but some are of criminal tendencies and they deliberately go into it knowing full well that it is wrong.

“We are ready to support the NDLEA in this difficult job and the agency can be rest assured that any arm of our government that you want to call upon for support, logistics or otherwise, we will be available to render help, because we cannot fold our hands and do nothing. When we have huge population like this, it comes with a lot of challenges and we need to support your effort in keeping our society safe.”

The Governor called for intensified advocacy and education as part of the approaches to stop potential users from being trapped in narcotic use. He said those already entangled should be identified for detoxification and reintegration back. He warned that harsh punishment awaited those are deliberately engaging in the sale and trafficking of hard drugs.

Sanwo-Olu praised President Muhammadu Buhari for approving the request of the agency to recruit more personnel in the fight against hard drugs, saying such would raise the capability of the NDLEA and strengthen it to battle narcotics traffickers.

Abdallah said Lagos remained strategic to win the battle against narcotic peddlers, disclosing that the agency had earlier destroyed 100 tons of hard drugs recovered from different spots across the State before embarking on the visit to the Governor.

He disclosed that the agency would be establishing more commands in Lagos to double its activities. This, he said, would help the NDLEA to further expose illegal drugs’ manufacturers and traffickers in the State.